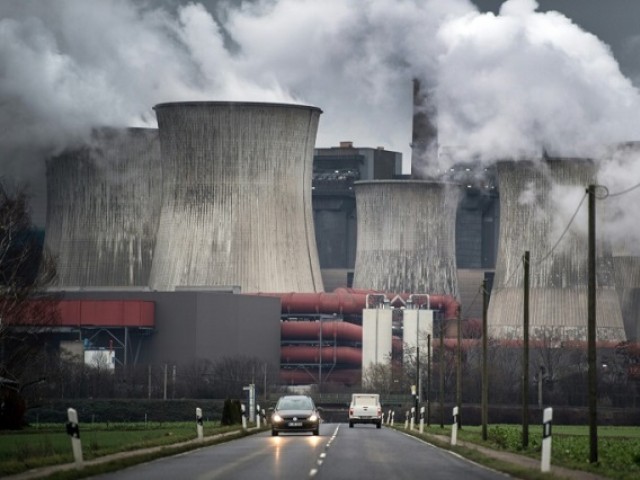 PARIS: Human activity churns out up to 100 times more planet-warming carbon each year as all the volcanoes on Earth, says a decade-long study released on Tuesday.

The Deep Carbon Observatory (DCO), a 500-strong international team of scientists, released a series of papers outlining how carbon is stored, emitted and reabsorbed by natural and man made processes.

They found that man made carbon dioxide emissions drastically outstrip the contribution of volcanoes — which belch out gas and are often fingered as a major climate change contributor — to current warming rates.

The findings, published in the journal Elements, showed just two-tenths of 1 per cent of Earth’s total carbon — around 43,500 gigatonnes — is above the surface in oceans, the land, and in our atmosphere.

The rest — a staggering 1.85 billion gigatonnes — is stored in our planet’s crust, mantle and core, providing scientists with clues as to how Earth formed billions of years ago.

One gigatonne is equivalent to around 3 million Boeing 747s.
By measuring the prominence of certain carbon isotopes in rock samples around the world, the DCO were able to create a timeline stretching back 500 million years to map how carbon moved between land, sea and air.

They found that in general the planet self-regulated atmospheric levels of carbon dioxide, a key greenhouse gas, over geological time frames of hundreds of thousands of years.

The exceptions to this came in the form of “catastrophic disturbances” to Earth’s carbon cycle, such as immense volcanic eruptions or the meteor strike that killed off the dinosaurs.

“In the past we see that these big carbon inputs to the atmosphere cause warming, cause huge changes in both the composition of the ocean and the availability of oxygen,” said Marie Edmonds, Professor of Volcanology and Petrology and Ron Oxburgh Fellow in Earth Sciences at Queens’ College, Cambridge.

The team estimated that the Chicxulub impact 66 million years ago, which killed off three-quarters of all life on Earth, released between 425 and 1,400 gigatonnes of CO2.

“The amount of CO2 pumped into the atmosphere by anthropogenic (man made) activity in the last 10-12 years (is equivalent) to the catastrophic change during these events we’ve seen in Earth’s past,” Edmonds said.

Celina Suarez, Associate Professor of Geology at the University of Arkansas, said modern man made emissions were the “same magnitude” as past carbon shocks that precipitated mass extinction.

“We are on the same level of carbon catastrophe which is a bit sobering,” she said.

By comparison, the CO2 released annually by volcanoes hovers around 0.3 and 0.4 gigatonnes — roughly 100 times less than man made emissions.

“Climate sceptics really jump on volcanoes as a possible contender for top CO2 emissions but it’s simply not the case,” said Edmonds.
“It’s also the timescale.”

Whereas Earth’s atmosphere has frequently contained higher concentrations of CO2 than the present day, outside of catastrophic eruptions it has taken hundreds of thousands of years for such levels to accumulate.

In contrast, man made carbon emissions have seen CO2 levels rise two thirds in a span of a few centuries.

“Well, yes it has. It will re balance itself, but not on a timescale that is of significance to humans.”