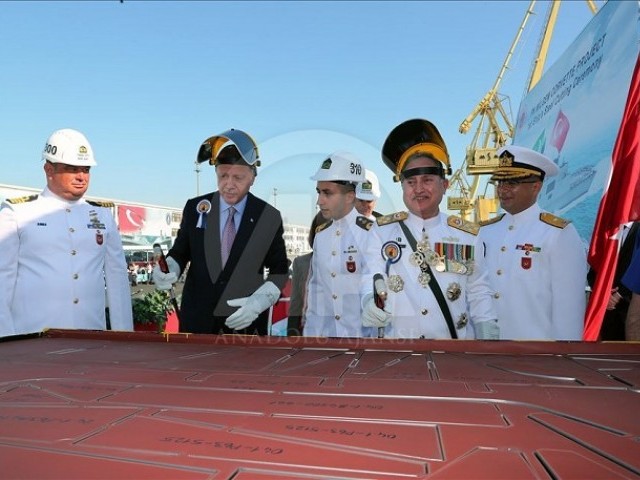 Pakistan Navy has signed a contract for the acquisition of four MILGEM-class ships from Turkey. PHOTO: ANADOLU AGENCY

Turkey is one of 10 countries worldwide able to build, design, and maintain warships using its own national capabilities, President Erdogan told the ceremony for the TCG Kinaliada, commissioned today for the Turkish navy, and a MILGEM (Turkish national warship program)-class ship being built for Pakistan.

In his speech, Erdogan said he hopes the Kinaliad, an Ada-class corvette, will benefit the Turkish nation and its sailors and further hopes Pakistan, a friendly sister nation to Turkey, will also benefit from the ship whose construction started today.

In July 2018, Pakistan Navy signed a contract for the acquisition of four MILGEM-class ships from Turkey.

“Our navy, rich with glorious victories, is carrying this legacy into the future by further strengthening it,” said Erdogan. Its top-class “equipment, discipline, qualified personnel and all the accomplishments it undertakes” make Turkey proud, he added.

Erdogan said recent events globally and especially in the Mediterranean point to the need to strengthen Turkey at sea, as in all other areas.

Greece and Greek Cyprus have recently challenged Turkey’s right to use the energy resources of the Eastern Mediterranean, but Turkey has not backed down, and continues to send drill ships to the region with military escorts. 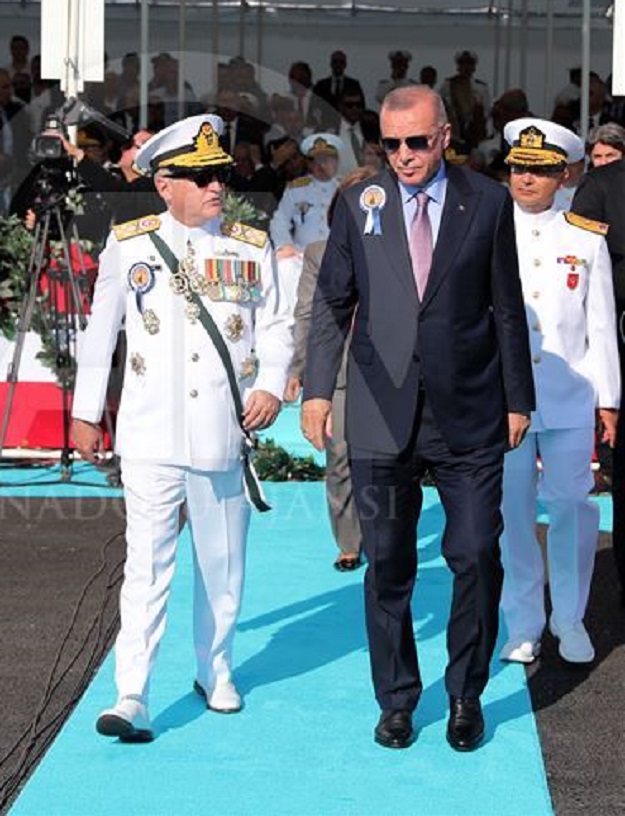 Turkey is resolved to reach heights domestically in all areas including shipbuilding, artillery, missiles, torpedoes, and electronic systems, Erdogan said.

Erdogan said the time is also close for Turkey to build its own fighter jets, just as it has built its own manned and unmanned aerial vehicles and satellites.

“We have not forgotten the time when we could not buy ships, planes and tools that we wanted, even when we wanted to pay for them,” he said.

Erdogan stressed that the corvettes that have been put into service to date have successfully fulfilled their duties by taking part in numerous national and international exercises.

“We have many more projects to strengthen our navy, and work on the diesel-electric submarine project, which will meet the needs of both our country and friendly states, is ongoing,” Erdogan said.

Erdogan stressed that Turkey’s dependence on foreign trade in the defense industry has dropped from 80% to 30%.

“Today, we have five firms among the world’s top 100 defense companies, and hopefully this number will continue to climb.

“Our goal is to eliminate our dependence on the foreign defense industry completely by 2023,” Turkey’s centennial, he said.

Commenting on the Kashmir dispute, Erdogan decried how no other countries besides Turkey and Malaysia have spoken out on the issue.

The India Occupied Jammu and Kashmir has been facing a clampdown since August 5, when the Indian government revoked Article 370 of the Indian Constitution, which conferred it a special status.

Hundreds of people, mostly political leaders, have been detained or arrested by authorities since the Indian government made the move.