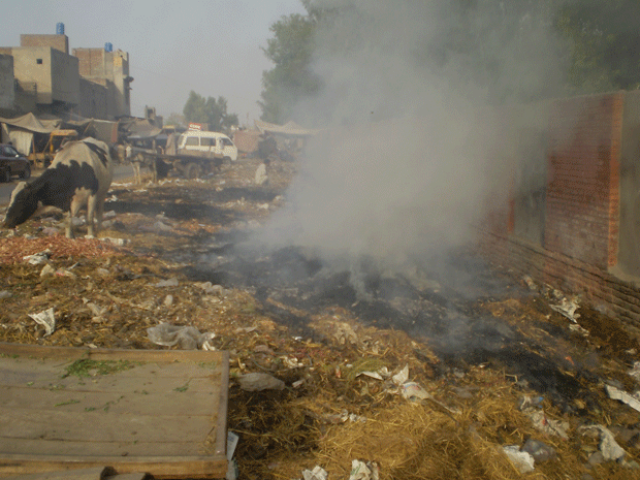 The hospital administration is burning piles of highly toxic and infected medical waste instead of dumping garbage during the daytime, as is the normal practice for medical institutions.

Reportedly, the administration is not following orders despite various warnings issued by Multan Commissioner Iftikhar Ali Sahu and Multan Deputy Commissioner (DC) Aamir Khattak. Notices were issued to Multan Nishtar Hospital on September 25 and September 26 after the issue was reported by Express News.

Deplorably, negligence by the hospital administration regarding the matter continues, and medical trash is being regularly burnt during the late hours of the night. This burning of medical waste is causing serious problems for the professors and residents of the staff colony. Patients and their attendants are also suffering from breathing issues because of the smoke emitted by medical waste.

Moreover, the floors and internal pathways of the hospital are covered with blood, causing an infection transmission to patients and others exposed to the pollution. Observers say negligence by Medical Superintendent (MS) Shahid Bukhari, in terms of administrative affairs, continues, creating more difficulties for patients, attendants and even for doctors.

The hospital lacks environmental hygiene due to inadequate resources. Blood clots of patients, especially injured ones, can be found almost everywhere inside the hospital. The sanitary conditions are observably one of the worst, raising grave concerns of the spread of infections and transmission of viruses to other patients.

On Saturday, the deputy commissioner along with Provincial Minister for Energy Dr Akhtar Malik and Member of Provincial Assembly Tariq Abdullah visited the hospital for inspection and found dengue larvae on the premises. The provincial minister expressed his concerns over the unhygienic environment of the hospital.

Owing to the unprofessional attitude of the MS, sources add, the sanitation staff of the hospital and the infection control department have become inactive. Over on the path towards the emergency unit and inside the wards, the floor is covered with blood dotted around the floor, putting patients, doctors, nurses and visitors at risk of being infected with potential diseases.