Ehsaas Programme to get $200m from Gates Foundation

Ehsaas Programme to get $200m from Gates Foundation 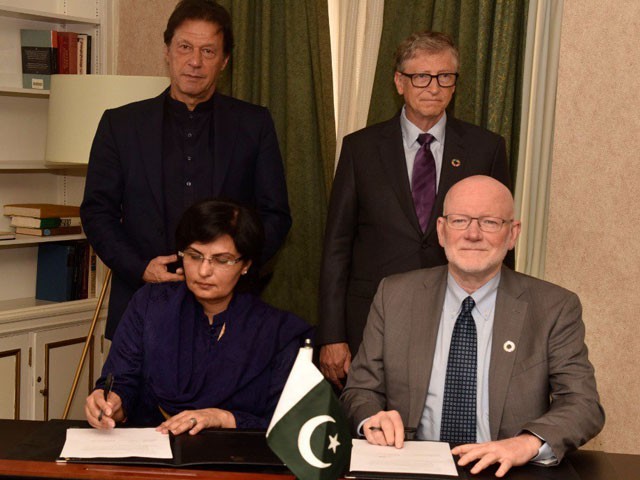 Pakistan and the Gates Foundation sign a memorandum of understanding (MoU) during a meeting in New York. PHOTO: TWITTER

The Bill and Melinda Gates Foundation on Thursday pledged to provide Pakistan with an amount of $200 million for the implementation of ‘Ehsaas Programme’ in the country next year.

Pakistan and the Gates Foundation signed a memorandum of understanding (MoU) during a meeting in New York supporting the government’s initiative in alleviating poverty from the country.

According to the agreement, the amount would be spent on 134 poverty alleviation projects under the programme.

Speaking on the occasion, Imran said, “Ehsaas Programme is a huge anti-poverty project in the history of Pakistan. It has been planned with a great deal of attention and I am pleased the Gates Foundation will also assist it with a great range of activities now.”

Pakistan and the Bill & Melinda Gates Foundation today signed a Memorandum of Understanding in support of the Ehsaas initiative to alleviate poverty in Pakistan. #UNGA #UNGA74 #PMIKInUSA pic.twitter.com/XU1CLkOLek

He stressed that poverty alleviation was top priority of his government from day one.

The programme would help to achieve the sustainable development goals set under the United Nations (UN), PM Imran added.

The prime minister and Gates also expressed full commitment to put right measures in place to end polio from Pakistan once and for all.

What is Ehsaas Programme?

The programme was launched by PM Imran in March this year with the objectives to reduce inequality, invest in people, and lift lagging districts.

At the launch of it, the premier had termed the programme a ‘jihad’ to alleviate poverty and bring the destitute people above the line of poverty.

As part of the initiative for the uplift of marginalised groups and those with physical and intellectual disabilities, directives had been issued for the procurement of support equipment. This included hearing aids, wheelchairs, walking canes, and other tools.

Under this programme, people with special needs will also get health insurance cards.