Tourists chance upon school of whale sharks off Charna Island

Tourists chance upon school of whale sharks off Charna Island

Accord­ing to WWF-P, whale sharks are on the verge of extinc­tion due to illega­l fishin­g practi­ces
By Aftab Khan
Published: September 23, 2019
Tweet Email 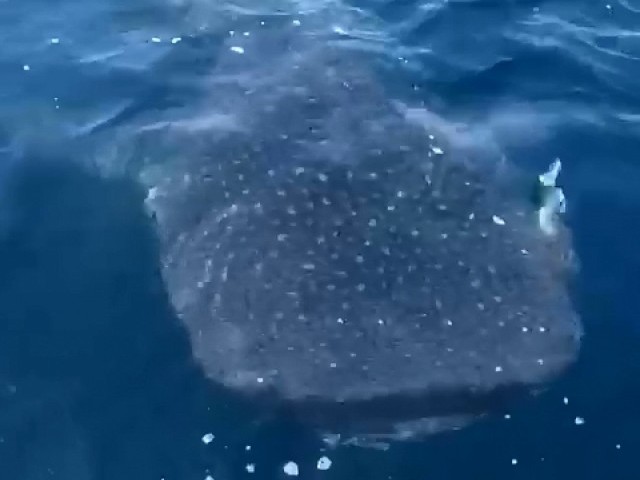 KARACHI: Visitors to the Charna Island near Karachi were in for a treat on Monday as they chanced upon a school of whale sharks swimming near the surface of the sea. The fish, some of which was estimated to weigh over three tonnes and extended up to 27 feet, was captured on camera as they dove into and above the shallow waters of the Arabian Sea. According to the World Wide Fund for Nature (WWF), whale sharks are among some of the rarest aqua species and are considered on the brink of extinction.

Pakistan has a long coast, extending 1,000 kilometers between Sir Creek and Jeewani. In addition to being rich in minerals, the seashores of Pakistan attract almost all kinds of aquatic animals.

Charna Island is located around 40 kilometers off Karachi near the Mubarak Village, bordering Sindh and Balochistan. On Monday, citizens making their way to the island for a picnic saw the whale sharks cavorting in the shallow waters off the shore. The tourists claim they also saw younger sharks swimming along with the shoal.

Whale sharks are referred to as Baran in Balochi and Andhi Mangra in Sindhi, owing to their tiny eyes. According to Moazzam Ali Khan, the technical director of WWF-Pakistan, the flesh of the whale shark was in high demand until the 1970s.

However, unchecked fishing and other factors have caused the whale sharks to become an endangered species. The sharks now face the threat of extinction all over the world. Consequently, various laws have been enacted to protect rare fish species.

In Pakistan, Sindh and Balochistan enacted the Fisheries Act in 2016, according to which there is a complete ban on the fishing and trade of whale sharks. In the past, fishermen used to kill whale sharks caught in their net not for their flesh but for their oil, which they used to apply on their boats, said Khan, adding that after WWF-P trained the fishermen, they release any such fish back into the sea. Over a hundred whale sharks caught in fishing nets since 2013 have been released back into the sea.

According to the WWF-P, unsafe practices and negligence on the part of the regulatory authorities have contributed towards a dangerous environment at the sea that is not conducive for marine life.

Marine and environmental experts believe that over 70 varieties of sharks were found in the coastal belts surrounding Karachi and Balochistan. However, most of the species have disappeared as a result of the unabated and illegal fishing practices and demand for shark meat in the international market.

The situation now is such that only half of the species have survived to this day while shark species such as Pondi Chari, Ara, Tiger, Mantare, Sting and Hammer have completely vanished from Pakistani seas. The Ara was particularly found in large quantities in the coastal areas of Sindh and Balochistan but now they have declined to a point where they are not seen at all. The specimen, known to cut wood like an ax, was last seen in a deadly state at the beach near Gwadar in 2016.