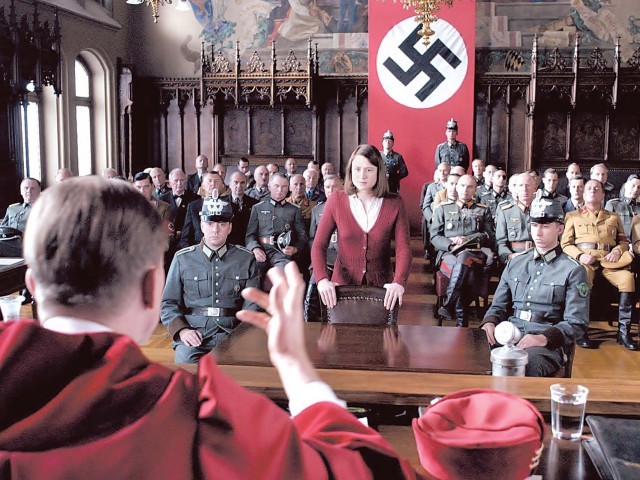 Sophie Scholl, a young woman with dreams and love of music, stands defiantly in front of Judge Roland Freisler, who was responsible for 2,600 death sentences of the 5,000 or so death penalties handed out by the People’s Court between 1934 and 1945. PHOTOS: INTERNET

“Shall our nation be forever cast out by all mankind?”

Such was the fear that fuelled Sophie Scholl’s conviction, and this resolve was fully tested in 1943, when she was arrested for being part of White Rose, a non-violent movement campaigning against Adolf Hitler between 1942 and 1943.

Sophie Scholl – The Final Days chronicles the event leading up to her arrest, the subsequent investigation and the farcical trial that culminated in her conviction.

The movie was screened at Safma Media Centre on Friday at 5pm to a near-capacity audience. The screening was delayed by five minutes to accommodate latecomers (given the Pakistani propensity to be late, according to one of the organisers) – a good decision, given how many people walked in at the last minute.

Dr Thomas Ditt, First Secretary and Head of Press and Cultural Section at the German embassy, had recommended the film for screening. Before the movie, he said that many people ask him about Hitler and he believed the movie is a good way of bringing one closer to the Germany of 1943.

Directed by Marc Rothemund, the 2005 German movie was nominated for an Oscar and won 18 other awards, including the Silver Bear awards for Best Actress and Best Director at the Berlin International Film Festival.

A movie such as Sophie Scholl cannot really be measured by the yardstick of a conventional film. It is based on a true story, and by most accounts is an accurate portrayal of what happened to Sophie, Hans Scholl, and Christoph Probst. There is no suspense to be generated and the director must instead rely on the power of his subject matter and the cast to make an impact.

To this end, instead of visual gimmickry, Rothemund relies on Julia Jentsch (who plays Sophie) to carry the movie, and she does not let him down. Her performance is tuned to perfection. She captures the essence of a young woman with much to look forward to; she is a person who is willing to die for what she believes in – she will not have a lesser punishment, she refuses to run away, even when she is offered a way out by the investigator, played brilliantly by Gerald Alexander Held.

The movie is told from Sophie’s point of view; we know what she knows, not a thing more, which serves to imbue the viewer with the same sense of fear that Sophie must have felt.

The director intersperses Jentsch’s understated performance with a haunting and ominous soundtrack that is reminiscent of war drums; the contrast serves to accentuate the drama that is underlying beneath the placid faces exhibited by the characters. Music is perhaps the only dramatic part of the movie, because Rothemund’s camera itself vanishes from the scenery at times, allowing the viewer to be transported to the investigation room, the cell and the courtroom. It is a conscious choice on part of the director and one that arguably works in favour of the effectiveness of the film – so much so that when Sophie got the final blow in the form of an immediate execution, her cry shook me up and sent a shiver down my spine.

The movie sparked quite a debate among those who attended the screening; some criticising it for its “novel-like” approach to storytelling, while others vehemently defending the beauty of the simplicity with which it was shot.

Others took a more subtle, but relevant, message from the film itself. Shazeb Khan, an Islamabadi blogger, for instance, took back the message that change must come from within, so that “you cannot be trashed as a nation.”