Film screening: Come noon, who is there beside you?

Film screening: Come noon, who is there beside you? 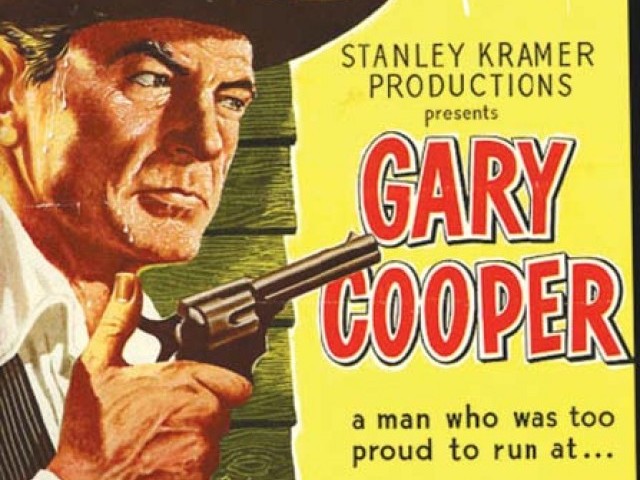 Not your typical western film, the understated tones in ‘High Noon’ are brilliantly executed. PHOTOS: FILE

Three riders slowly make their way across the streets of Hadleyville, sending a scare down the spine of some residents, exciting others. Something interesting is up, something so interesting that the hotel clerk wouldn’t miss it for “all the tea in China.”

But Marshal Will Kane (played by  Gary Cooper, who won Oscar for his performance), getting married at that very instant and about to retire from his post, does not know that. He does not know that Frank Miller, a cold-blooded murderer that he put away five years ago, is a free man. That he is headed to the town by the noon’s train to exact his revenge.

The news of Miller’s imminent arrival comes just in time as Kane and his wife, Amy, are about to embark on their journey. Just over an hour left. The two are quickly bundled onto a horse cart and sent off, before there is a chance of confrontation.

Kane, however, is not a man who has ever run away from anything. And something tells him that he must stay back for one final confrontation to save the town – his town, filled with his friends, from the menace that is Miller. But he is up for a rude awakening when he comes back and goes around rallying for a posse.

Such is the premise of Fred Zinnermann’s 1952 Oscar-winning film High Noon, which was screened at the Safma Media Centre in F-7/4 on Friday, as part of its weekly public screening, to a capacity attendance.

The film was chosen for preservation in 1989 in the United States National Film Registry by the Library of Congress and made American Film Institute’s (AFI’s) “100 Years … 100 Movies” list both in 1998 (ranked 33) and 2007 (ranked 27). AFI considers a number of criteria before making the list, including cultural impact, historical significance, popularity over time, awards and critical recognition among others.

Often described as the western made for people who do not like westerns, High Noon sets itself apart right from the beginning. An understated reunion of the three thugs with the film’s iconic Oscar-winning number “Do Not Forsake Me, Oh My Darlin” playing in the background sucks the viewer in. You are promised something different, something special. And the movie delivers.

The duration of the narrative in the diegesis is almost the same as the running time of the film. Much happens as the sheriff goes around the small town preparing for Miller’s arrival, but the film never feels rushed.

The reason why Kane must stay back to face Miller is never explained. The viewers are expected to understand it themselves. Just as well, because one cannot possibly think of any reason that could be compelling enough for any person in Kane’s shoes to not want to leave. But then Kane is a man, and his manhood demands that he stays.

The movie’s plot has great potential for melodrama, but Zinnermann’s restrained direction saves it from becoming a forgettable affair. Gary Cooper’s trademark reserved, understated performance complements the movie’s style and direction quite well. And this is why the few dramatic moments dispersed through the carefully crafted movie become all the more effective.