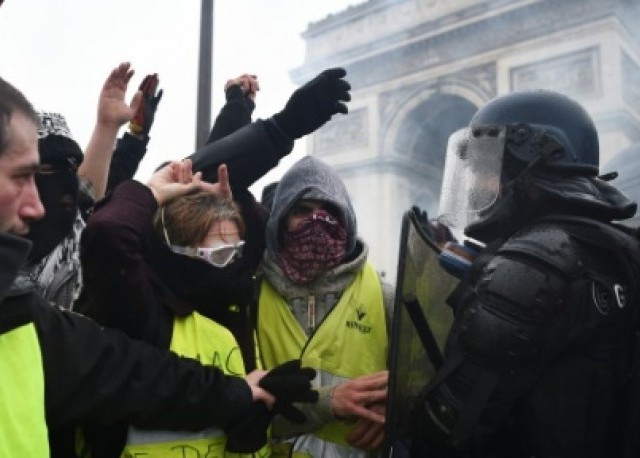 A file photo of the Yellow Vest protest in France. (PHOTO: AFP)

PARIS: Police detained 158 people over the violence surrounding the weekend’s “yellow vest” and climate crisis protests in Paris – including an off-duty officer arrested for insulting his colleagues, prosecutors said.

The officer, a police captain who works for the interior ministry, is among 19 due in court on Monday. He faces a charge of public outrage and rebellion.

This weekend’s number of arrests is the highest since the violence that marred the May Day protests in Paris when 315 people were detained.

Prosecutors issued warnings to around 90 of those detained before releasing them, while some protesters were banned from returning to Paris for six months under powers introduced into law back in March.

Prosecutors dismissed the cases against another 35 people who were freed, while others were released pending further investigations of their case.

As well as the 19 facing charges in court on Monday, another six people remain in custody.

Saturday’s protests were marked by violence blamed on hardcore activists known as the Black Bloc, who clashed with police at both the yellow vest protests and the March for the Climate.

Climate march co-organisers Greenpeace denounced both the Black Bloc violence and what they said was the disproportionate response from the police.

Demonstrations have been banned on the Champs-Elysees after protesters clashed with police on the famous Paris avenue on December 8 last year, in the early days of the yellow vest protests. On that weekend, police detained 900 people: the most since the anti-government protests began.

Paris officials mobilised 7,500 members of the police force for Saturday’s protests, to head off what they feared would be resurgent protests from sections of the yellow vest movement.