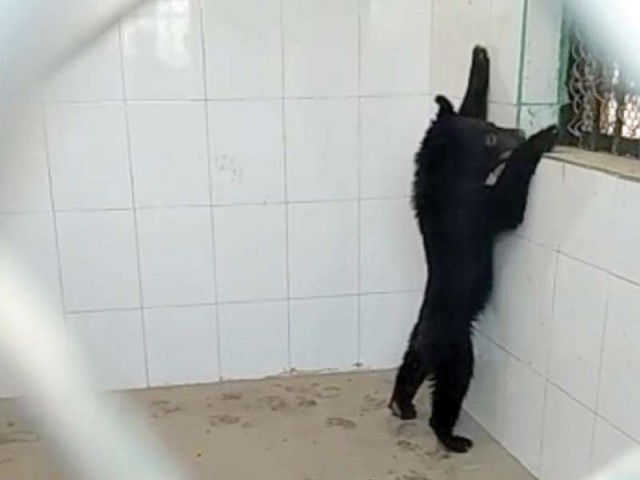 The bear cub seen back in captivity at the Peshawar zoo. PHOTO: EXPRESS

PESHAWAR: A bear cub enjoyed a few hours of freedom after escaping the horrid conditions of captivity in Peshawar zoo.

After a 72-hour search, the wildlife department safely retrieved the bear cub from a nearby filed and handed it back to the zoo authorities who put the wild animal back in confinement.

The cub was put back into the cage on Saturday after a medical examination. The Rs3.5 million bear was out of the cage during the cleaning procedure at the evening and the zoo administration came to known to the information after one of the keepers reported the missing of the bear to the administration, the source within the zoo told express tribune. The administration has also informed the community of the remaining alert after a bear kid run away from the zoo, while a search operation was carried out in the nearby field, but after a day-long search, nothing was found in the farms.

Later today the wild department has used all-out resources in the search of the bear and today they found the bear within the nearby farms and handed over it to the administration after a medical check-up.

Peshawar zoo is the first one in Khyber-Pakhtunkhwa. In spite of being a new establishment, it was quick to catch up with other zoos where animals fall sick and die due to embezzlement in resources.