Declin­e comes on back of 21% reduct­ion in import­s
By ​ Our Correspondent
Published: September 21, 2019
Tweet Email 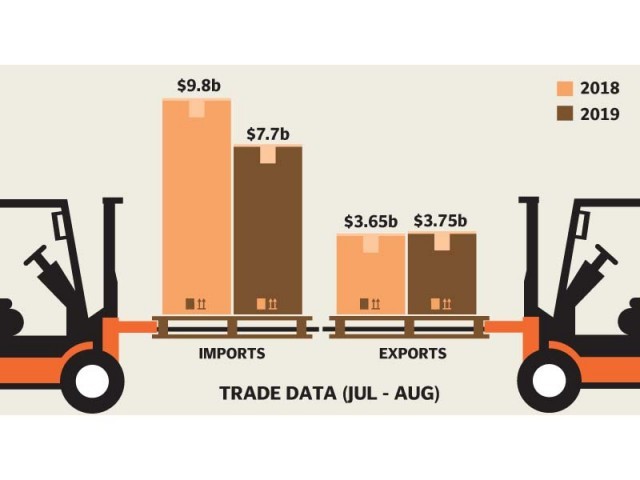 ISLAMABAD: Pakistan’s trade deficit shrank 36% to $3.9 billion in first two months of the current fiscal year on the back of a one-fifth reduction in imports but exports marginally grew by 2.8% despite a steep currency depreciation that added a heavy cost to the economy.

The trade figures released finally by the Pakistan Bureau of Statistics (PBS) on Friday after a delay of 10 days showed that exports contracted both on a month-on-month and year-on-year basis in August despite over one-third devaluation of the rupee against the US dollar.

Cumulatively, the exports grew 2.8% or just $102 million to $3.75 billion in the July-August period of the current fiscal year, which suggested a serious review of the monetary policy.

Overall, the trade deficit, which stood at $6.1 billion in the same period of last fiscal year, shrank to $3.9 billion in first two months of this fiscal year, the PBS reported.

In absolute terms, there was a decrease of $2.2 billion in the trade deficit and almost the entire reduction came from the import side.

Imports dropped 21.4% to $7.7 billion during the period under review but the improvement was mainly because of reduction in imports of the petroleum group, transport group, textile and food groups.

In absolute terms, imports contracted $2.1 billion in the first two months, which provided some relief to the government.

However, the real challenge was the exports that registered a marginal growth of 2.8% and stood at a mere $3.75 billion – remaining shy of even $4 billion during the first two months. In absolute terms, the exports increased $102 million, which was nothing compared to the cost that the currency depreciation inflicted on the economy and businesses.

Out of the four major groups, two groups – food and textile – recorded some increase in export receipts while there was a reduction in receipts on account of petroleum and other manufacturing groups, according to the PBS data.

Exporters have long been getting subsidised loans, electricity and gas, and are exempted from the normal income tax regime. The central bank let the currency depreciate by over 34% to give a boost to exports and curb imports.

The PBS released the trade data of two months with a lag of 10 days. Earlier, it had released July trade data with a lag of one month. The national data collecting agency’s affairs have gone haywire under the current government.

Against posts of five regular members at the PBS, currently only two members are serving on a permanent basis. Tenure of one of them, who is responsible for national population census and economic statistics, is ending next week.

PBS officials said the delay in release of statistics was caused by a lack of reconciliation of figures with the Federal Board of Revenue. The planning secretary had to write a letter to the FBR chairman to get the issue resolved.

Imports also posted a negative growth of 9% to $3.7 billion last month. Resultantly, the trade deficit contracted $15.3 million to $1.8 billion in August over July.