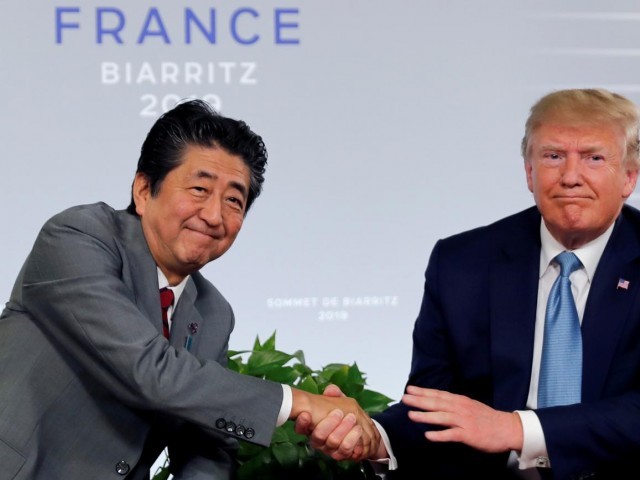 WASHINGTON: US President Donald Trump on Monday said the United States had reached an initial agreement on tariffs with Japan, after often claiming that Tokyo has had an unfair advantage in bilateral trade.

Trump and Japan’s Prime Minister Shinzo Abe last month said the deal was close to being completed, and that they hoped for a formal signing during the UN General Assembly later in September.

“I am pleased to report that my administration has reached an initial trade agreement regarding tariff barriers… with Japan,” Trump said in a letter to Congress released by the White House. “I intend to enter into the agreement in the coming weeks.”

Trump added that further negotiations would be held with Japan to secure “a comprehensive trade agreement that results in more fair and reciprocal trade.”

The statement said an agreement had also been reached on digital trade, but it gave no details about US tariffs on Japanese cars.

US officials have previously said the tariff agreement would benefit US farmers hit by the US-China trade war and who are an important group of voters for Trump’s re-election bid in 2020.

Trump said after the G7 summit last month that he was not considering auto tariffs “at this moment”.

Over much of the past year, the scope of talks has narrowed to exclude the automotive sector, the source of most of the $67 billion US trade deficit with Japan.

Instead, Trump and Prime Minister Shinzo Abe in August announced an agreement in principle of a deal that covered reductions in tariffs on agricultural and industrial goods, but not autos.

A spokesman for US Trade Representative Robert Lighthizer could not immediately be reached for comment on the letter and the trade deals.

Trump and Abe said at the G7 summit in France that they hoped to sign the agreement at this month’s United Nations General Assembly in New York.

Trump’s letter did not disclose any content of the agreements, but Japan had previously said it was willing to consider a deal that would reduce agriculture tariffs to levels previously contemplated under the Trans-Pacific Partnership, a trade deal that Trump quit on his third day in office in 2017.