'Scared' Arsenal grateful for a point at lowly Watford

'Scared' Arsenal grateful for a point at lowly Watford

Gunner­s were lucky to escape with a point after blowin­g a 2-0 lead to draw 2-2 at bottom-of-the-table on Sunday
By AFP
Published: September 16, 2019
Tweet Email 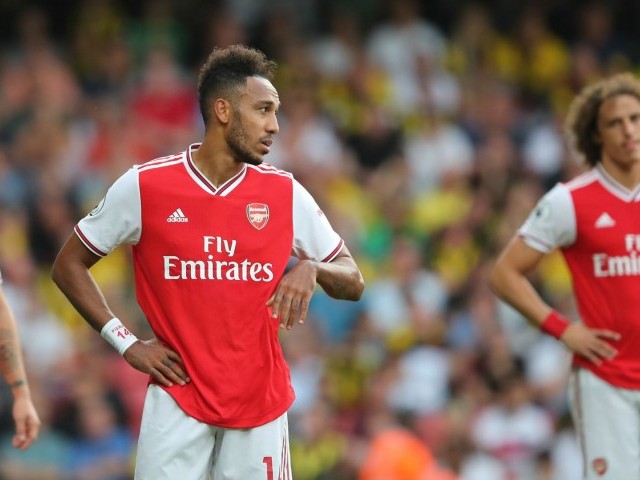 Pierre-Emerick Aubameyang looked to have the Gunners well on course for a comfortable three points when he struck twice in 11 minutes before the break. PHOTO: AFP

LONDON: Arsenal captain Granit Xhaka admitted the Gunners were lucky to escape with a point after blowing a 2-0 lead to draw 2-2 at bottom-of-the-table Watford on Sunday.

Quique Sanchez Flores enjoyed a happy return as the Hornets manager as Tom Cleverley and Roberto Pereyra’s penalty secured a thoroughly merited share of the spoils.

Pierre-Emerick Aubameyang looked to have the Gunners well on course for a comfortable three points when he struck twice in 11 minutes before the break.

However, Sanchez Flores, who was appointed as Hornets’ boss for the second time last week after one point from their opening four games of the season saw Javi Gracia sacked, roused the hosts for an impressive second-half fightback.

“We came out and played such a bad second-half. You have to say we are happy to take a point,” said Xhaka.

“We were scared in the second-half. We knew they would come at us and push us hard but we have to show more character and not be scared.

“We have spoken about it. We cannot give a performance like this in the second half.”

Arsenal played a huge part in their own downfall as they were consistently caught in possession on the edge of their own box, trying to play out from the back.

That was how Watford got a foothold back in the game as Sokratis Papastathopoulos’s pass was intercepted inside his own box by Gerard Deulofeu and the ball broke to Cleverley to fire home eight minutes into the second-half.

“They controlled the match with their pressing, causing us (to make) some mistakes. Scoring the first goal gave them confidence to continue that,” said Arsenal manager Unai Emery.

“That is the moment we needed calm and control.”

However, the Spaniard refuted Xhaka’s suggestion that his side were scared.

“Maybe that is (his) individual feeling. I think in football you never should be scared and you have to take that moment. We need to be strong in our mentality.”

Emery is clearly still trying to find the right balance between his brilliant attack and shoddy defence.

Mesut Ozil was recalled to his starting line-up for the first time since he and Sead Kolasinac were the victims of a carjacking attack in July.

Ozil initially struggled to settle as Watford started the brighter with Cleverley’s rising drive forcing Bernd Leno into a fine save before Jose Holebas fired horribly off-target with a great chance from the edge of the area.

However, Watford have now conceded 10 goals in their opening five games to the campaign and were opened up far too easily to allow Aubameyang to open the scoring on 21 minutes.

The home fans were screaming for a foul as Dani Ceballos won back possession, but Watford were slow to react as Kolasinac burst down the left and fed Aubameyang, who spun and fired low past Ben Foster.

It was soon 2-0 after a 20-pass move. Ozil freed Ainsley Maitland-Niles in behind the Watford defence and the right-back squared for Aubameyang to slot home his fifth goal in as many games this season.

However, Arsenal unravelled after the break to miss the chance to climb up to third.

A point sees the Gunners move level with Manchester United, Tottenham, Chelsea and Leicester behind Liverpool and Manchester City in the early season battle for a top-four finish.

And it could easily have been worse for Arsenal as Deulofeu sent an effort inches wide and Cleverley’s fierce drive was deflected over by Luiz as wave upon wave of Watford attack continued even after equalising.

But is was Abdoulaye Doucoure who squandered the best chance of all for a winner deep into stoppage time when he shot too close to Leno with just the German goalkeeper to beat to leave Watford still bottom of the Premier League table.

“Second-half I am really happy with the reaction,” said Sanchez Flores. “It’s very difficult to do what they did against Arsenal.”

Three things we learned from the Premier League weekend