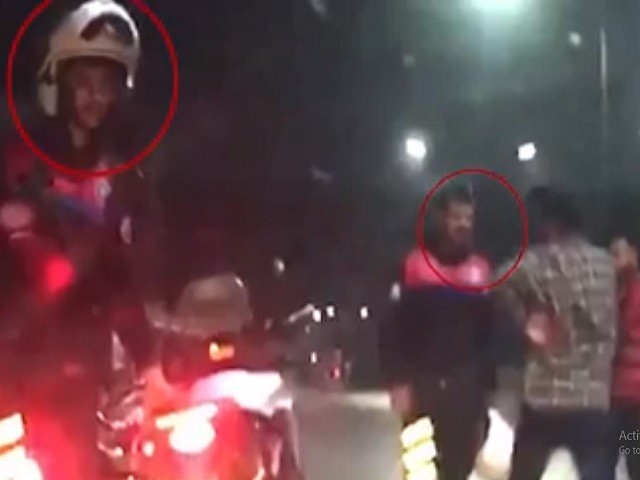 LAHORE: Another incident illustrating the high-handed behaviour of the Punjab police has been reported in the provincial capital after footage of a Dolphin Squad team physically assaulting and misbehaving with a young man on Cavalry Bridge surfaced.

The footage, which was captured by cameras installed in a vehicle, showed two Dolphin Squad officials confronting a young man on a motorcycle. However, in less than 30 seconds, the official slaps the youth and starts misbehaving with him.

Punjab Police Inspector General (IG) Arif Nawaz Khan has also taken notice of the incident and officials from team 302 of the Dolphin Squad have been suspended.

The suspects were pulled over for one-wheeling, an activity which poses a serious threat to lives of the suspects and other citizens, and not for possessing incomplete documentation as was previously reported.

A case has been registered against the suspects for one-wheeling at the Naseerabad police station. Dolphin Squad SP Bilal Zafar is conducting an inquiry into the incident. Zafar stated that such incidents will not be tolerated, adding that disciplinary and departmental action is being taken against officials involved in such incidents.

Speaking about the problems being faced by the investigation wing, former Punjab IG Khwaja Khalid Farooq stated that the force is facing pressure from the public and the police department to ensure maximum recovery. However, the use of the archaic method of extracting information using physical torture is one of the biggest issues, he said.

“Constant supervision and the installation of CCTV cameras at police stations has prompted investigation officers to carry out their interrogations in private areas in an effort to avoid legal and disciplinary action,” he explained.

There is a lack of personnel and most investigation officers believe that physical torture is the only way to extract information from suspects.

The Dolphin Squad, a patrolling wing of the Lahore police, was developed at a cost of billions of rupees with an aim to improve the tarnished image of the force and to improve police emergency response. Assistance was also sought from Turkey in this regard.

At the time, the commanders had said that the reason behind the unusual name for the force was because the dolphins were a symbol of love, peace and friendliness; these themes encapsulated the motto behind constituting such a force.

The squad has visibly helped in improving police emergency response. However, when it comes to improving the image of the police force, the squad has proven to be counterproductive.

The Dolphin Squad has been the subject of public outcry after two incidents which claimed the lives of two citizens in the span of two weeks earlier this year.

In May, a woman returning home from the hospital was killed after a stray bullet, fired by Dolphin Squad officials, hit her. In another incident during the same month, the force shot at and injured a youth as he was returning home.

However, instead of offering medical assistance, officials took the victim to a police station and reportedly tortured him. A week later, CCTV footage surfaced showing four officials torturing a shopkeeper on Band Road.

These are just a few examples of the kind of the incidents that have occurred. To tackle such behavioural issues, Dolphin Squad Bilal Zafar introduced refresher courses that have been ongoing since June. Zafar claims that the initiative was producing results as the number of complaints against the squad has dropped drastically.

Police excesses have not been limited to the Dolphin Squad in Lahore. Almost every week, a case concerning police officials misusing their authority have been reported in the city.

The most recent of these include an assistant sub-inspector (ASI) misbehaving with an elderly woman outside Central Police Office, a custodial death in North Cantonment, the unearthing of an illegal police torture cell in Gujjarpura and the custodial death of a suspect robber at a lock-up in Lower Mall.