PM Imran set for another 'austere US trip'

PM Imran set for another 'austere US trip' 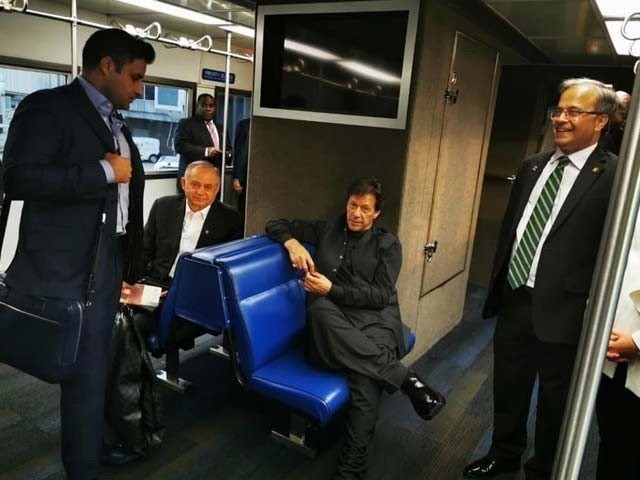 Prime Minister Imran Khan with his delegation during his maiden visit to the United States back in July. PHOTO: PID/FILE

ISLAMABAD: Prime Minister Imran Khan’s July visit to the United States garnered immense fanfare with the local and international media spotlight on the frugality of the trip.

Sources in the government have now revealed that the premier’s visit to the US later this month will cost the national exchequer Rs25 million, which comes down to $162,000.

It is also believed that PM Imran will again take a commercial flight instead of opting to charter a plane.

The prime minister will reach Washington on September 21, where he will not only hold meetings with US President Donald Trump but also address the United Nations General Assembly session.

He will raise the Kashmir issue at the UNGA with Foreign Minister Shah Mehmood Qureshi sharing that PM Imran would present the case of the Kashmiri people as on August 5 India stripped Occupied Kashmir of the special autonomy it had for seven decades through a rushed presidential order.

Last month, the Pakistan Tehreek-e-Insaf (PTI) government released the expenses of PM Imran’s maiden trip to the US with the total costs paling in comparison to those of the previous Pakistan Muslim League-Nawaz (PML-N) and Pakistan Peoples Party (PPP) governments.

The total cost of the visit was Rs11 million, which comes down to $67,180. A 27-member delegation accompanied the premier on the three-day trip.

He flew on a commercial Qatar Airways flight with a stopover in Doha, instead of opting to charter an entire plane.

Rs1.35 million was spent on the hotel expenses for the PM’s delegation with Rs6 million ditched out on their travelling expenses.

Meanwhile, the prime minister had given gifts of Rs142,000 and spent Rs700,000 on tips. Rs1.3 million were spent on food and refreshments.