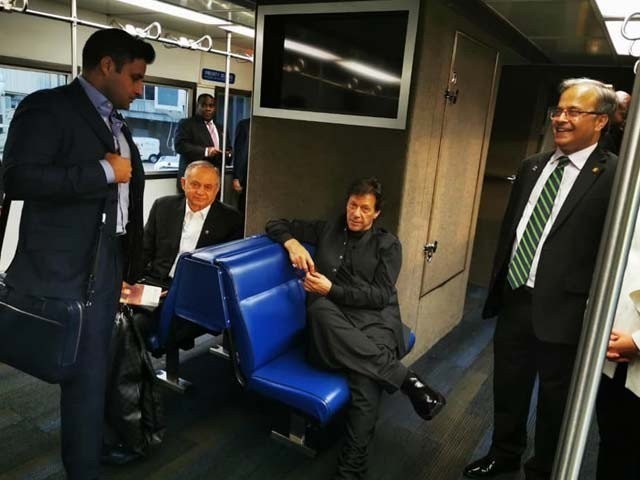 Imran Khan with his delegation in the US. PHOTO: PID

KARACHI: With the nation taking keen interest into the official expenses of Prime Minister Imran Khan, the federal government released the costs of his recent three-day trip to the United States on Thursday.

The premier’s maiden visit to Washington was followed by immense fanfare with the government vowing not to follow in the footsteps of former PPP and PML-N regimes when it came to travel and living costs.

PM Imran’s visit cost almost Rs11 million to the national exchequer, which comes down to $67,180, according to the details released by the government.

He took a 27-member delegation on his maiden trip, and flew on a commercial Qatar Airways flight with a stopover in Doha, instead of opting to charter an entire plane.

Rs1.35 million were spent on the hotel expenses for the PM’s delegation with Rs6 million ditched out on their travelling expenses.

Rs1.3 million were spent on food and refreshments.

He stayed at the Pakistani ambassador’s official residence, and not an expensive hotel during the official visit.

In comparison, according to the government’s claim, former premier Nawaz Sharif had doled out $549,854 during his 2015 trip to the US whereas PPP Supremo Asif Ali Zardari spent $752,682.

Facts speak for themselves! And it does not take spending huge amounts of public money to achieve tangible results for the country as PM IK's successful USA visit demonstrated! pic.twitter.com/dCjzIVE2pa

The trip was mostly hailed as a major diplomatic win for Islamabad with Trump even offering to mediate the Kashmir dispute between Pakistan and India.

This caught New Delhi off-guard and was unexpected by the media and analysts.

President Trump also reached out to premier Imran for his government to help negotiate a deal with the Taliban to end the longstanding conflict in Afghanistan.

Talks with US on Afghan endgame today