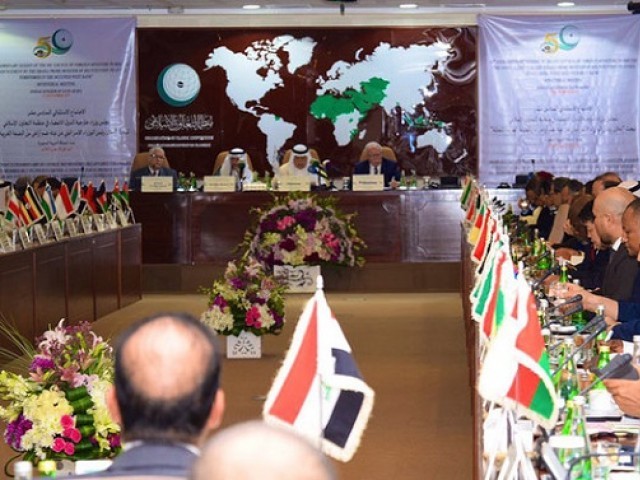 Foreign ministers and diplomats of the Organisation of Islamic Conference (OIC) attend a conference in Jeddah on Sunday, Sept. 15, 2019. PHOTO: OIC

JEDDAH: Pakistan has termed Israel’s planned move to annex territories in the occupied West Bank as a “dangerous trend” and a “threat to international peace and security”.

Education Minister Shafqat Mehmood led the Pakistani delegation at the 16th extraordinary meeting of the Organisation of Islamic Cooperation (OIC) Council of Foreign Ministers held in Jeddah on Sunday.

According to an official statement, the OIC called the meeting at Saudi Arabia’s request after Israeli Prime Minister Benjamin Netanyahu promised to annex the Jordan Valley if re-elected.

All Israeli settlements are viewed as illegal under international law.

The education minister said Tel Aviv’s move would only inflame tensions in the region.

He appealed to the OIC members, United Nations and the international community to revive their obligation towards the people of Palestine.

“The world should condemn such irresponsible announcements, being used as party slogans in the election campaign, which could jeopardise peace in the region,” Mehmood was quoted as saying.

He also drew attention to the unfolding sufferings of the Kashmiri people in the past seven weeks at the hands of another occupying power.

Mehmood said the people of Palestine and Kashmir both share a history of over seven decades of occupation, adding, “Their right to self-determination which is protected under international law continues to be trampled upon.”

“Both of them have been subjected to collective punishment, state-sanctioned terror, and unspeakable suffering,” he added.

The minister said that Kashmiris’ struggle for legitimate rights has been deliberately been branded acts of terror to divert the attention from the repression of Israel and India.

Kashmiris, he said, had been locked into a giant prison since August 5.

He shed light on the communication blockade and mass detentions of residents enforced by New Delhi.

The education minister said Kashmiris have even been deprived to  access of health services and life-saving drugs.