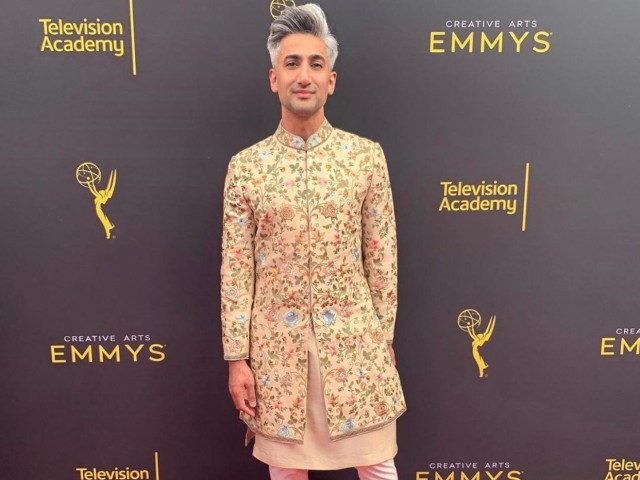 British-Pakistani reality star Tan France is representing Pakistan at the Emmy’s, posing for a photo recently at the prestigious red-carpet event.

In true Tan fashion, he wasn’t going to let his bestie walk the carpet without looking flawless. Tan helped fix the 32-year-old author’s Christian Siriano ensemble during his step-and-repeat.

Representing Queer Eye, QE Crew and Pakistan at the Emmy’s. @varunbahlcouture Look by the incredible

Wearing a black strapless mini dress that featured a vibrant and voluminous bow on the back, the British designer made sure the outfit’s main accessory was centre-stage. After France fluffed out the bow and made it pop, JVN strutted the red carpet, reported E! News.

Moreover, the Queer Eye cast were all so supportive of each other during their photo ops. At one moment, Antoni Porowski looked in awe of the resident groomer on the show.

“Family’s all here at the Emmys,” the 32-year-old shared in another post, alongside a photo of him posing with co-stars Tan, Bobby Berk and Karamo Brown.

“Another Emmy night with these boys,” Berk wrote on Instagram with a similar picture of the cast. “Couldn’t be more grateful and humbled by the love our fans show us. Thank you.”

Another Emmy night with these boys. Couldn’t be more grateful and humbled by the love our fans show us. Thank you #emmys #queereye

Along with the reality TV personalities’ major red carpet moment at the Creative Arts Emmys, the Netflix stars have so much more to celebrate. As of now, the hit reality series has earned three awards tonight for Outstanding Directing (Reality), Outstanding Picture Editing (Structured Reality/Competition) and Outstanding Casting (Reality).

Furthermore, Queer Eye is nominated for two 2019 Emmys for the categories, Outstanding Directing for a Reality Program and Outstanding Structured Reality Program. With the star-studded ceremony kicking awards season into high gear, it will be exciting to see what the night entails.