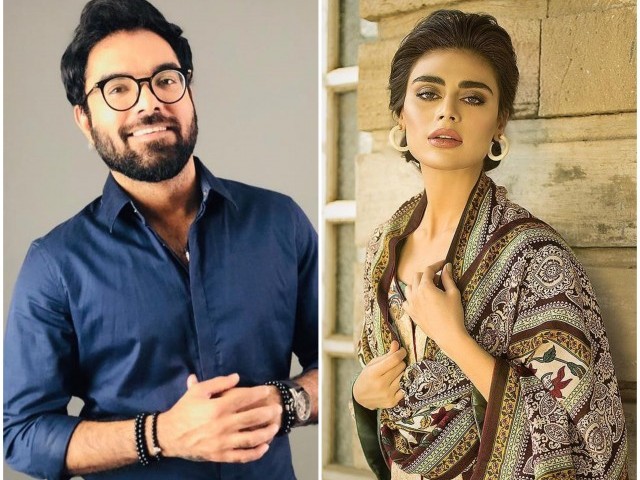 Since Karachi based crime-thriller Laal Kabootar was selected as Pakistan’s official submission for the upcoming Academy Awards 2020, celebrities from far and wide have poured in congratulatory messages on social media.

“Laal Kabootar is a gift that keeps on giving and is truly one of a kind! To me, it stands as a landmark project within my 6 year career. Thankyou Allah and hugs to the team,” the Superstar actor wrote.

Hussain also shouted words of support but not without throwing a little bit of shade at none other than model Sadaf Kanwal. Recently, the star made some snide remarks towards Pasha during a show segment. As a reply to one of the questions during the Rapid Fire, Kanwal claimed that Pasha shouldn’t be in the entertainment industry.

Naturally, many were not happy about the comments including the Chhalawa star. “Jis larki ko kuch din pehly industry mai nahi hona chahiye tha woh Oscars mai ja rahi hai, (The woman whose place in the [film] industry was being questioned a few days ago is now heading to the Oscars),” Hussain wrote via his Instagram stories. “Shahbash (congratulations/welldone), Mansha Pasha,” he concluded. 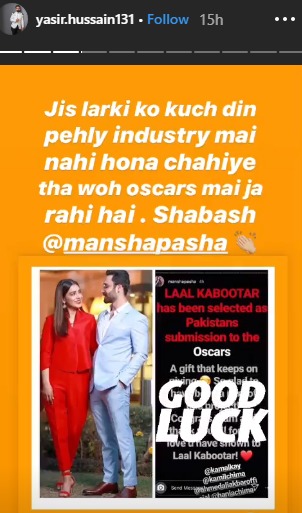 Directed by Kamal Khan, the film received rave reviews by the critics and was also praised by the masses when released in March this year. The film also starred Ahmed Ali Akbar in the lead role.

In an exciting update on Twitter, the ‘Laal Kabootar’ team also announced the film’s selection for Oscars 2020. “Something for us all to be proud of as a team. All the sweat and hard work was more than worth it,” the tweet read.

Ladies and gents some exciting news ahead:

Laal Kabootar has been selected as Pakistan's submission to the Oscars!!!

Something for us all to be proud of as a team. All the sweat and hard work was more than worth it. pic.twitter.com/EYz8aFz6Rn