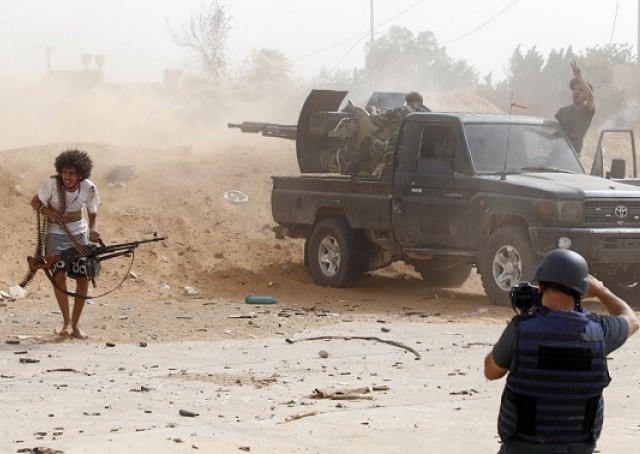 A journalist covers the frontline during clashes between forces loyal to strongman Khalifa Haftar and fighters loyal to the Libyan internationally-recognized Government of National Accord (GNA), south of the Libyan capital Tripoli. (Photo: AFP)

TRIPOLI: In a country splintered by conflict and propaganda wars, Libya’s journalists are caught in the crossfire between battlefronts and partisan employers, exposing them to risks on the ground.

Fighting that erupted in early April when eastern strongman Khalifa Haftar launched an offensive on the capital Tripoli has only exacerbated the cleavages in the country’s already fragmented mediascape.

The battle pits the forces of Tripoli’s UN-recognised Government of National Accord (GNA) against fighters loyal to Haftar, who backs a parallel administration in eastern Libya.

The rival sides each run their own news agencies and official television channels.

And Libya’s private media outlets have dug in too – taking sides and thereby exposing their journalists to potential reprisals.

“Because of the conflict… journalists in Libya can’t do their normal work anymore,” Mohamed al-Najem, who runs the Libyan Center for Freedom of Press (LCFP), told AFP.

Threats and attacks since the 2011 ouster of longtime leader Moamer Kadhafi have prompted several private television networks established by businessmen and politicians in the years immediately after his fall to pull out and transmit from abroad.

“The [Libyan] media, especially the ones broadcasting from abroad, are largely responsible for the exacerbation of hate speech and incitement to violence,” Najem said.

Those outlets, he added, are “encouraging abuses on the ground, which affect their journalists”.

In its latest poll on worldwide press freedoms, Reporters Without Borders (RSF) ranked Libya 162 out of 180 countries.

The LCFP has documented 32 attacks on journalists since early April, in what it says marks an increase since Haftar launched his offensive.

He said many journalists were, “whether they like it or not”, forced to work with Libya’s warring factions.

On July 16, the eastern-based administration backed by Haftar banned 11 TV stations it deemed hostile, accusing them of being “terrorism apologists”.

Pro-Haftar outlets have banned journalists from covering the strongman’s push to take the capital – unlike the GNA, which has opened up the front on its side to dozens of reporters.

“More than 150 foreign journalists have obtained visas since the beginning of the war,” according to the GNA’s foreign press department.

“Our role is limited to authorisations, but journalists are entirely responsible for their own security on the front,” department head Abdelfattah Mhenni told AFP.

Since the fighting kicked off in Tripoli, an AFP cameraman and another from Reuters have been wounded covering clashes.

Their injuries come after the July 2018 abduction and murder of journalist Musa Abdul Karim and the death of photographer Mohammed bin Khalifa in January this year.

Since the beginning of the year, “journalists and other media professionals [in Libya] continued to be subjected to intimidation and arbitrary detention,” UN Secretary-General Antonio Guterres said in a report published in late August.

He said the UN mission in Libya had “reviewed one case of unlawful killing and more than 10 cases of the arbitrary arrest and detention”.

In early May, two journalists from a private anti-Haftar broadcaster were arrested by the strongman’s forces while covering the fighting south of Tripoli.

They were released 23 days later, but only after tribal pressure.

None of the arrested or assaulted journalists agreed to talk to AFP for fear of reprisals against themselves or their families.

Many have been forced to change phone numbers, move, or even flee the country.

In a push to protect journalists, the LCFP is working on a mobile phone app that would provide reporters with a safe way to document attacks.

Presented recently to a group of journalists in Tripoli, the application “Kon Chahed” (Be a witness) is now in its trial phase.

LCFP hopes the app will allow journalists “to report attacks… and warn colleagues who are in the same area”.