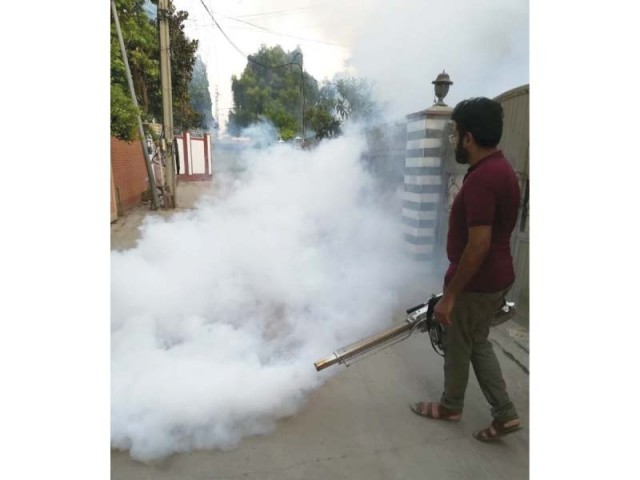 A technician busy in anti-dengue fumigation in a Rawalpindi neighbourhood on Saturday. PHOTO: EXPRESS

RAWALPINDI: The Rawalpindi Cantonment Board (RCB) conducted an anti-dengue operation in its jurisdiction on Saturday. The teams led by Public Health Officer Muhammad Waris Bhatti conducted an operation on directions of RCB Chief Executive Officer Sibtain Raza. The teams conducted indoor surveillance of 1,780 houses and found larvae in 25 houses which were destroyed.

The anti-dengue teams inspected 25 houses and 10 other points including tire shops, factories, hotels and filtration plants and destroyed larvae.

Similarly, the outdoor inspection teams looked for dengue larvae in different areas including Tanch Bhaata, British Homes, Westridge, Gawalmandi, Azizabad, Kamalabad, Ghaziabad, Dhok Syedan, Peshawar Road, Chauhar Chowk and Saham and found larvae at some 10 points. The teams imposed fines of Rs30,000 and warned the owners of such sites that they would be sealed if larvae were recovered next time.

The teams also appealed to the people to keep their surroundings clean and not let water get stagnant at any spot.

The indefensible attacks of dengue mosquitoes have left the government perplexed as around 100 more dengue positive patients were reported in different hospitals across the district over the past 24 hours owing to which the collective figure of patients has escalated to as many as 2,165. The recent patients included 53 from areas of Potohar Town and 37 from areas of Rawal Town.

Up to 19 patients were also reported from the jurisdiction of cantonment areas.

Recently, a rise in dengue patients from areas of the cantonment and Rawal Town has set the alarm bells ringing for the government even though the teams are rigorously conducting an anti-dengue operation on a daily basis. Subsequently, the district emergency response committee led by Rawalpindi Deputy Commissioner (DC) Muhammad Ali Randhawa would monitor anti-dengue measures on a regular basis. The allied hospitals have treated and discharged up to 1,046 patients so far whereas two patients have lost their lives to the deadly disease.

At the moment, up to 102 dengue positive patients are undergoing treatment at District Headquarters (DGQ) Hospital, 104 in 497 Benazir Bhutto Hospital (BBH) and 117 in Holy Family Hospital (HFH).