Dr AQ Khan irked by snail-paced hearing on his case

Dr AQ Khan irked by snail-paced hearing on his case

Says he wants to live like a common man at a place where he can talk and move freely­
By ​ Our Correspondent
Published: September 12, 2019
Tweet Email 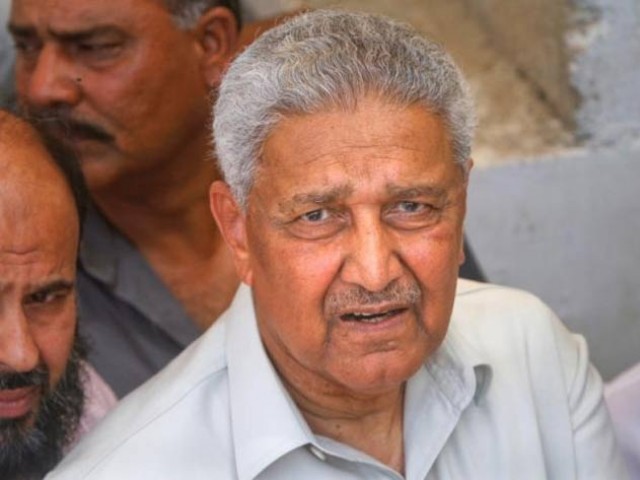 LAHORE: The pioneer of the nuclear programme of Pakistan Dr Abdul Qadeer Khan seemed disappointed over the snail-paced judicial process concerning his writ petition he had filed seeking his free movement

They pointed out that “the titled writ petition is pending in Lahore High Court (LHC) and the same was fixed for July 11, 2019, but on the day fixed but due to non-availability of the bench the same relisted and till date the same was not fixed for further proceedings”.

The titled petition is habeas corpus in nature and life of the petition curtailed by the respondents without lawful justification and reason. Therefore, the tilted petition may kindly be fixed for some early date to hear the arguments of either party, the counsel further implored in the petition.

Earlier, Dr AQ Khan had demanded the Lahore High Court Chief Justice for strict punishment to those officials allegedly involved in betraying the court by giving forged statements in his case.

Khan, in his open letter, raised several questions in response to the claim of so-called security officials who had confined his movement to his house.

He said he wanted to live like a common man at a place where he could talk and move freely rather than living in a house under ‘security threats’.

He requested the LHC Chief Justice to deal with the forged statements being given by the officials in his case in light strict punishment fixed by the country’s top judge for those found involved in giving false statements in courts.

He quoted his petition he had filed in the LHC against the restrictions imposed by the government over his moment that according to him had been confined to his home only in the name of security threats to him.

He revealed that former prime minister Chaudhary Shujat Hussain and renowned lawyer SM Zafar were the witnesses of it. He was promised by former president Musharraf that he will be restored after a few days but all in vain as Musharraf did not keep his promise.

In his main petition, petitioner Dr Qadeer had contended the court that petitioner has fundamental right to plead his case himself (in person) or by his representative. The respondents (the government of Pakistan and Strategic Plans Division Force) had imposed an illegal ban on him. He wishes to appear before the court in person to explain his grievances but he is being restrained, therefore, his presence is made sure in the courtroom to dig out the facts of the case, and to achieve the ends of justice.

He had prayed that an order be passed to the respondents regarding his appearance before the court. And respondents also be directed for not creating difficulties in his way to court premises.