Prisoner swap a big win for Ukraine's Zelensky, but at a price

Prisoner swap a big win for Ukraine's Zelensky, but at a price 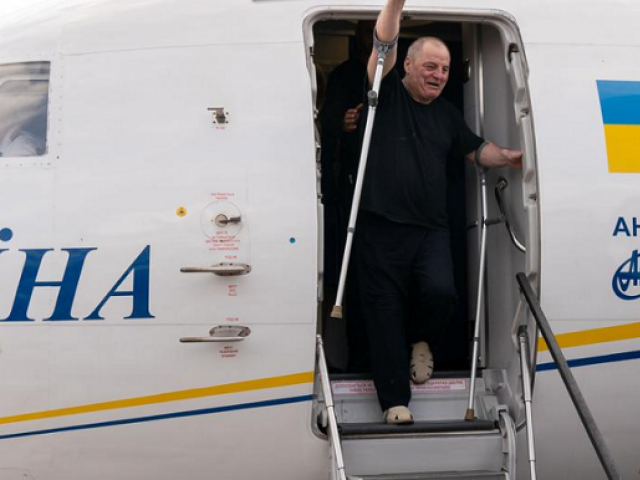 A recently exchanged Ukrainian prisoner gets off a plane upon arrival in Kiev after Russia-Ukraine prisoner swap, at Borispil International Airport, outside Kiev, Ukraine. PHOTO: Reuters

Ukrainian President Volodymyr Zelensky scored a big win by exchanging prisoners with Russia, experts say, but Moscow made him pay a heavy price and will be looking for more concessions.

In office since only May, the political novice managed to fulfil a key campaign promise by getting 35 prisoners held by Russia sent home.

The ex-detainees, including 24 sailors and filmmaker Oleg Sentsov, were given heroes’ welcomes when they landed in Kiev – with Ukrainians across the country gathered around televisions showing them embracing family members and shaking the president’s hand.

The comedian-turned-politician, who swept to power in a shock April election win, will be able to point to the swap as proof that he is up to the task of being president.

In exchange for the prisoners, Kiev handed the same number over to Moscow including Vladimir Tsemakh, a fighter with Moscow-backed rebels linked to the downing of flight MH17.

Kiev says Moscow insisted on Tsemakh’s involvement in the swap and he was delivered to Russia despite pleas from the Netherlands.

Investigators have described Tsemakh as a person of interest in the shooting down of MH17, which was travelling between Amsterdam and Kuala Lumpur when it was hit by a Russian-made BUK missile over rebel-held eastern Ukraine.

International investigators in June charged three Russians and a Ukrainian in absentia with murder in the case. The 298 people on board the plane, two thirds of them Dutch, were all killed.

German tabloid Bild described Tsemakh’s handover as a “double victory” for Russian President Vladimir Putin: “He gets the only suspect in detention and Europe loses some of its confidence in Ukraine, which ignored this call from the Netherlands”.

Kiev needs the West’s continued support in its conflict with Russia, which is under European and US sanctions over its annexation of Crimea and role in the Ukraine crisis.

Russia took control of the Black Sea peninsula in 2014 and backs the separatists in the conflict in eastern Ukraine, which has left more than 13,000 people dead in the last five years.

France and Germany helped to negotiate a peace accord that has yet to be implemented. Paris has called for a new summit of Putin, Zelensky and the French and German leaders to take place later this month.

The French foreign and defence ministers were due in Moscow for talks on Monday.

“It is clear that the West will try to force us to resolve the problem with Russia. They are fed up,” said a Ukrainian source with good knowledge of the issue.

Kiev needs to have the courage, the source said, to resist the pressure and “get the most for ourselves in this situation”.

The focus of the talks will be reviving the Minsk accords, based on an agreement that was reached in 2014 but failed to stop the fighting.

Although full-scale fighting has subsided, there are still regular clashes in frontline areas that leave dead on both sides.

The agreement called for a ceasefire, the withdrawal of heavy weapons from the frontlines, prisoner exchanges, local elections and the delivery of humanitarian aid. This would be followed by constitutional changes to give more power to regional authorities in exchange for the disbanding of rebel forces.

It is unclear on what issues Zelensky would be ready to negotiate, but he has said resolving the conflict is his top priority. The war has been a huge drain on government resources and drag on Ukraine’s economy, and has forced some 1.5 million people from their homes.

Fesenko said major concessions were out of the question, but the risk was that Zelensky would wade into dangerous waters.

“The West understands that there are red lines Ukraine will not cross,” he said, but Zelensky needs to be careful not to “fall into traps laid by Putin”.

Ukrayinska Pravda, a popular Ukrainian news website, wrote that the exchange had shown Zelensky was “ready to make controversial concessions” to get what he wants from Russia. But Zelensky has never laid out a full plan for reaching a peace deal, it said, “so no one knows what concessions he is ready to make” next.