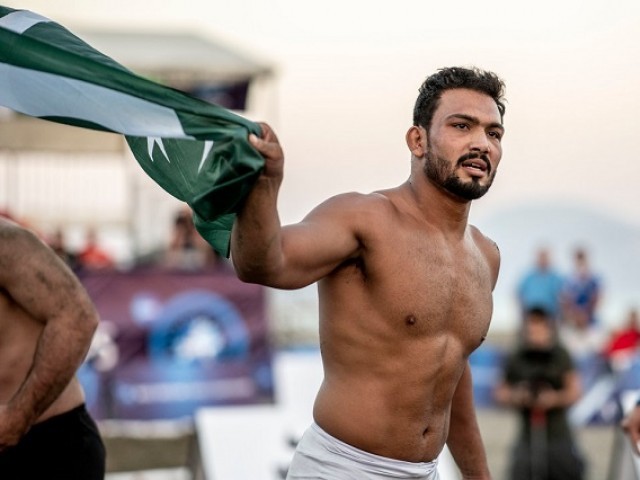 KARACHI  : Muhammad Inam may be the most successful athlete Pakistan has produced in the last decade, but his sport, wrestling, is something that the country and Pakistan Sports Board does not take seriously.

After missing out on the Asian Championships which were also the qualifying round for the 2020 Olympics earlier this year, Inam will now be missing the World Wrestling Championship too which will start in Kazakhstan from September 14.

According to the Pakistan Wrestling Federation (PWF) they had to pull out of the competition as Inam is recovering from a knee injury that he picked up two months ago, but also due to the fact that PSB has not held any national camp for athletes after the Asian Games last year.

Inam has been training on his own at his Akhara (wrestling gym) and the government did not even support the federation instead allotting a grant of Rs 1.5 million that barely covers the international costs for the wrestlers.

The PWF secretary Muhammad Arshad Sattar told The Express Tribune: “We had to pull out of the World Wrestling Championship, what else can we do?”

“Inam has been training on his own, we had earlier asked PSB, repeatedly for a national camp, but nothing happened, they don’t want to entertain us it seems, but it is the athletes that are suffering. Now we can’t even send our top athlete to the championships, because we are out of funds. Rs1.5m is not enough, we struggle to find sponsors, and maybe, just maybe if PSB had organised the camp for our athletes they wouldn’t get injured like this.”

“We are not supported despite achievements in wrestling.”

Inam is a double Commonwealth Games gold medallist (2010, 2018) in 84 and 86 kg freestyle, South Asian Games gold medallist and two-time World Beach Wrestling Champion. Although he received the Pride of Performance award from the government of Pakistan, his road to Olympics only seems harder because the country does not have the resources to support his participation in the ranking events either.

Inam is, however, now looking forward to fulfil his dream to win the gold medal at the World Beach Games, as he became the first Pakistani earlier this year to qualify for it.

“I’m training very hard, and recovering too, and we are missing the world Championships I know,” said Inam.

“It is not easy, but I want to win the gold at the World Beach Games next month. I have been working hard for that, and I have been training hard at home too, but training myself, and then also teaching and training other juniors at my gym is tough. I picked up an injury almost two months ago and underwent surgery.”

It has been eight weeks and the injury was severe, but the 30-year-old did not want to give up hope so he went ahead with the surgery. Although the doctors he found in Lahore helped him, Inam felt that the absence of sports doctors or sports medicine professionals in the country was unacceptable.

Despite being grateful to his doctors Inam said: “The fact that we don’t have sports medicine and the doctors who are experts in dealing sports injuries saddened me. But I’m getting back on my feet. My goal is the World Beach Games.”

Having missed out on the rankings tournaments for the Olympics due to lack of funds again Inam wants to make the best of three events next year from February till April, but he understands that the slots will be difficult challenge.

“The athletes who have been regularly competing in the ranking events will eventually get easier draws, because with each participation in the events their ranking improves as well, the more the points, the better the draw, but Pakistan have not sent any athletes to these events. I want to qualify for the Olympics, but it is not easy,” explained Inam.

Speaking about a plan of action for wrestling, Inam cited India’s example who send their top wrestlers for training aboard and are preparing their athletes for the Olympics as well.  He added that the upcoming 2019 South Asian Games in December would also require preparations.

“There needs to be a plan, a route, for now we don’t even have a national camp, but this is not enough, and you cannot expect any athlete in any sport to just pack their bags and qualify for the Olympics, after training at home on their own. There needs to be planning and resources at disposal, but I’m willing to do whatever it is that is required of me. I don’t want to give up because of the odds, because I know the younger athletes look up to me, and I want them to play, so I’m doing everything I can, in my power,” said Inam.

“Maybe they should send us to Russia where we can train for the Olympics qualification rounds for next year, but there needs to be a commitment from the government.”

The World Beach Games will take place from October 12 and Inam is hoping to make up for all the events he has missed in Qatar, by becoming the first Pakistani wrestler to win a gold medal at the event.