Three killed as building collapses in blast in Lahore

Three killed as building collapses in blast in Lahore 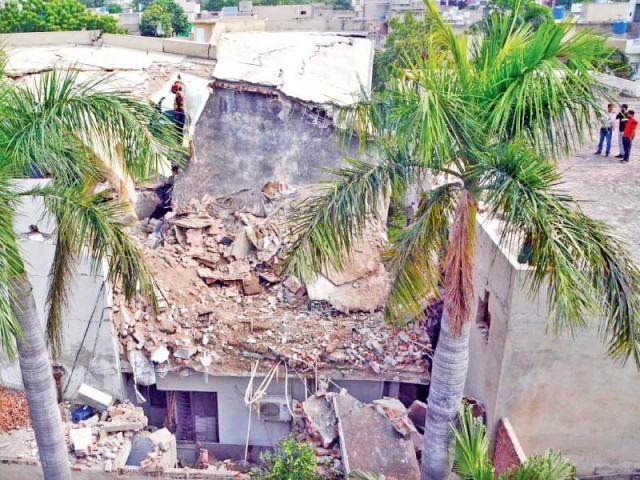 The huge impact damaged one portion of the two-storey building. PHOTOS: ONLINE

LAHORE: At least three members of a family died after a double-storey building collapsed due to a reported oxygen cylinder blast in Iqbal Town.

Punjab Emergency Service (Rescue 1122) evacuated all three victims trapped under debris in an operation which lasted 10 hours. The operation started at around 6am and continued till 4pm.

One killed, nine injured in two IED blasts in Quetta

Those who received minor injuries were identified as Arif’s son Zeeshan, Saima and three-month old Murtaza.

According to the details, an asthma patient was living in a house in Kashmir Block Iqbal Town. He used an oxygen cylinder to ease his breathing and the device would be replaced as a matter of routine. On the morning of the incident, the cylinder was also changed.

After some time, it reportedly exploded and this created a chain effect. As a result, the gas cylinders in the kitchen also exploded. The huge impact damaged one portion of the two-storey building. Rescue 1122 spokesperson Farooq Ahmad said at least ten rooms of three houses were affected by the blast. He added that forensic teams were ascertaining the exact cause of the explosion. 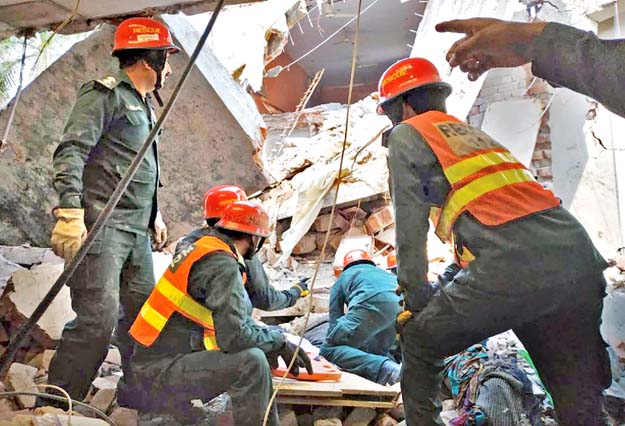 After the blast, at least three family members were trapped under the debris. Rescue teams faced a lot of difficulty in rescuing the victims as the operation was still underway after several hours.

After a few hours, the Specialised Disaster Management team, led by Dr Farhan Khalid, was summoned. Farooq commented it was far from a routine operation. He explained that the building had not fully collapsed and the hanging skeleton posed a threat to the operation. There was fear that it may fall on the rescuers and the debris, causing a complicated situation.

The Disaster Response Team (DRF) drilled a tunnel under the debris to reach the victims and the strategy involved evacuating those trapped before removing the debris. SSP Operations Ismail Kharak, while speaking on the occasion, said initial investigations suggested it was a cylinder blast. The teams recovered parts of the cylinder from the scene and circumstantial evidence suggested the blast occurred during replacement of the cylinder. However, further investigation details from different law enforcement agencies, including Punjab the Forensic Science Agency (PFSA), would reveal more comprehensive information.

The incident created panic in the locality as a large number of people rushed to the spot. Senior personalities, including provincial minister Mehmoodur Rasheed and SSP Operations Lahore Ismail Kharak, also visited the place.

Fire safety regulations have been largely ignored in the construction of high-rise and domestic buildings in the provincial capital. A survey of 250 high-rise buildings, conducted by Community Emergency Response Teams (CERT), reveals that emergency staircases are missing in 29 such structures, while 12 lack fire doors. In addition, there are no hydrant systems in 24, fire-extinguishers in 152, fire alarm systems in 55, evacuation plans in 33 and response teams in 25. The ignorance has led to many tragedies such as the LDA City fire and many others.

Also, this is not the first complicated rescue operation conducted by authorities. In November 2015, over 40 people had died and over 114 were injured after a three-storey factory collapsed in Sundar Industrial Estate. Hundreds of the victims were trapped under the debris and it took Rescue 1122 at least five days to complete the operation.