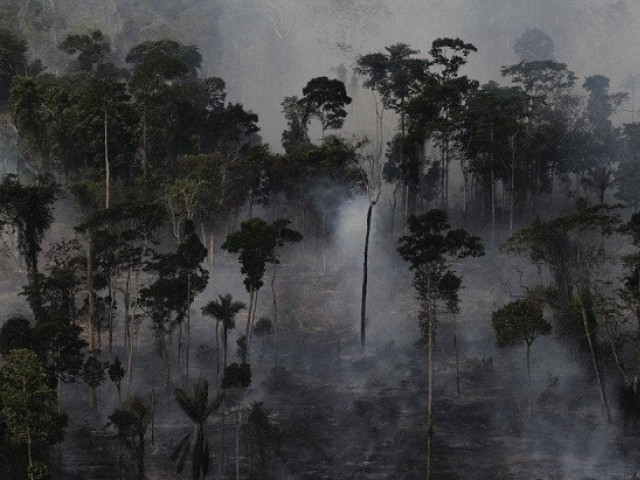 Smoke billows as an area of the Amazon rain forest is burned to clear land for agriculture in 2013 near Novo Progresso, Para state, Brazil. PHOTO: REUTERS

COLOMBIA: Fires in the Amazon rainforest will likely become more severe, frequent and widespread in future unless action is taken to stem rising deforestation and climate change, scientists warned ahead of Friday’s regional summit aimed at tackling the problem.

In Brazil, home to the biggest share of the world’s largest rainforest, blazes have nearly doubled so far this year compared with 2018, while fires are also burning in neighboring Bolivia.

Last month, Brazil’s space research agency, INPE, said the number of fires in the Amazon was the highest since 2010, sparking international calls for protection to be stepped up.

“There is a clear correlation between the numbers of days without rain, the scale of deforestation, and the number of forest fires,” said Andre Guimaraes, head of the non-profit Brazil-based Amazon Environmental Research Institute (IPAM).

Leaders of nations that are part of the Amazon basin are meeting in the Colombian border town of Leticia on Friday to discuss how best to stem tree loss and fires in the rainforest, which stores planet-warming carbon and is seen as a vital buffer against climate change.

The presidents of Colombia, Peru, Ecuador and Bolivia are attending, along with Suriname’s vice-president.

Brazil’s President Jair Bolsonaro cancelled travel plans due to surgery but will join via video link and is sending a delegation headed by his foreign minister.

Colombia hopes the meeting will agree on a regional action plan – the Leticia Pact for the Amazon – to protect the rainforest and promote its sustainable use. Colombian Environment Minister Ricardo Lozano said it would aim to take into account “extreme events and high temperatures”.

In Brazil’s Amazon forest, deforestation declined sharply between 2004 and 2012, after which the rate began trending upward again – and other Amazon nations are also seeing a rise.

More trees are being cut down or burned to open up land for agriculture and cattle ranching, along with illegal mining and logging that is going unchecked, environmentalists say.

When patches are cleared in the forest, it becomes more prone to catching fire, said Mark Cochrane, a professor at the University of Maryland Center for Environmental Science.

“Once you start building roads, you connect that landscape, so fires can go through the grass,” he said. Forests that have been damaged or cut down have holes in their canopy, as well as more edges that “bleed moisture”, drying them out and increasing the risk of fires, Cochrane said.

“Once you damage those forests, they are not as fire-immune as they were. So instead of needing months without rain, you only need a couple of weeks,” he added.

IPAM’s Guimaraes said worsening drought was making the forest drier too, hiking the fire threat. “The fluctuations in the moisture in the Amazon are becoming more and more dangerous because of climate change,” he said, adding drought was now happening there in a way not seen in previous decades.

In August, a flagship report from the UN climate science panel called for wiser use of land, including preventing forests from being cut down and reducing meat consumption, to help keep the rise in global temperatures to agreed limits. But deforestation in Brazil’s Amazon rose 67 per cent year-on-year in the first seven months of 2019 and more than tripled in July alone, according to INPE.

Plans by right-wing Brazilian president Bolsonaro to develop agriculture and mining in the Amazon, along with funding cuts for environmental law enforcement, have fuelled a jump in deforestation rates, environmentalists and scientists say.

“Bolsonaro is essentially saying to developers, ‘Go forth, this government is not going to prosecute you’ – he gave the green light,” said William Laurance, a distinguished research professor at Australia’s James Cook University.

“When you combine poor policy enforcement, the long-term degradation and also fragmentation of the Amazon – the forest being chopped up into pieces – and climate variations, you get the situation we see today,” he said. Stemming deforestation in Brazil’s Amazon – most of it cleared illegally – will largely depend on the policies adopted by Bolsonaro’s government, IPAM’s Guimaraes said.

“There are two main approaches to fight deforestation – one is to protect areas, to make sure (they) are out of the market. The other one is command and control,” he said.

While much of the world’s attention has focused on fires in Brazil, blazes in Bolivia have decimated at least 1 million hectares (3,800 square miles) of hilly tropical forest and savannah near its border with Paraguay and Brazil. Bolivia’s Evo Morales is a left-wing indigenous president – a stark political contrast to Bolsonaro in Brazil.

But both leaders favour agricultural expansion in the Amazon forest, researchers said. According to Laurance, Bolivia has some of the “most aggressive” land clearing in the region and one of the world’s highest rates of deforestation.

“Bolivia has a history of intensive logging, cattle ranching and soy farming bolstered in large part by high Chinese demand,” he said, noting Morales had been open to foreign investment. Laurance, a tropical conservation biologist, said this year’s forest fires had raised questions around whether the Amazon was getting closer to a tipping point that could irreversibly damage its ecosystem and bring more fires.

“Some scientists have argued that 30 per cent deforestation of the Amazon would be enough to tip the rainforest into new territory that would destroy the forest’s natural water recycling, with wide-ranging impacts on rainfall, fires and the global climate,” he said. Leading Brazilian climate scientist Carlos Nobre estimates that 15-18 per cent of the Amazon rainforest has already been cut down.

But the exact level of forest loss that would precipitate a tipping point – when damage done to the rainforest reaches the point of no return – is not yet known, Laurance said.

“The truth is that nobody is really sure about this,” he said. “We’re working at the moment at the margins of our capacity to project the future.”