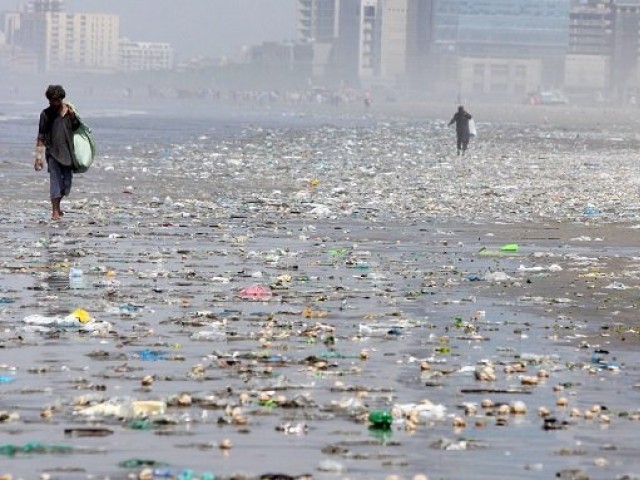 KARACHI: No one knows where the medical waste at the Sea View beach came from. Or even how it ended up at the site. The Sindh government is pointing fingers at the Centre and its various agencies. The federal government, for its part, remains mum on the issue. Stuck in the middle are the thousands of picnickers and revellers who throng the shore every week.

The issue came to light on Monday, when Shaneira Akram, the wife of former Pakistan cricket star, Wasim Akram, posted a number of photos and a video of hospital waste dumped at various points along the beach.

Hours later, the strip was buzzing with activity, as officials of the provincial government, as well as the Cantonment Board Clifton (CBC), stepped up efforts to remove the waste. But that was not the end of it. Akram visited the beach again on Thursday and raised the alarm once more. “Now I want you [government] to treat the people of Karachi exactly like your family and do the right thing and issue a public service warning across all media until we [people] know the beach is safe,” she tweeted.

In a subsequent tweet, she asked the authorities to cordon off the beach for the public until it was cleared of the medical waste lying around on the shore. “If appropriate authorities do not issue a warning to hundreds and thousands of users for this weekend, it will be complete negligence towards the health and safety of the public. The TV channels have done their job. Now is the time you [government] do yours. Show the people of Karachi that you care,” she demanded.

According to the provincial government, the federal government’s agencies have yet to comply with formal ‘requests’ made by provincial agencies in accordance with the recommendation of the Water Commission.

Following the instructions of the Supreme Court-mandated Judicial Commission on Water and Sanitation, the Environment, Climate Change and Coastal Development Department (ECCCDD) had written letters to various provincial and federal agencies and departments for compliance, but it failed to receive any response. The ECCCDD even sent a reminder to all the departments, including Port Qasim, Karachi Port Trust, Local Government Secretary, all cantonment boards, Karachi Metropolitan Corporation and others on Wednesday, seeking details on solid waste collection and disposal.

“We will summon them to the tribunal court if they don’t obey our orders,” said ECCCDD Secretary Khan Mohammad Mahar. “The federal government’s indifferent attitude has compelled us to take action against them according to the law.”

Asked why his department couldn’t keep a check on the waste being dumped at the shore, Mahar said they have very limited resources. “We don’t actually clean or sweep the garbage but ask relevant offices to dump the waste according to the law.”

For their part, the Cantonment Board Clifton’s spokesperson, Amir Arab, told The Express Tribune that they have vigilance teams patrolling the area round the clock and that no one could have brought the waste and dumped it there. “The medical waste must have come to the beach via one of the sewerage lines that open onto the shore,” he speculated.

Meanwhile, environmentalists and health experts have jumped the bandwagon in demanding that the government take action and clear the beach of all waste. “It is an alarming situation for the public,” commented environmentalist and journalist, Afia Salam. “The authorities must ensure its [medical waste] removal immediately,” she added.

Echoing Akram’s concerns, Salaam said that the government should penalise those dumping medical waste at the beach. “Who has dumped the hazardous waste?” she questioned. “The government must trace the source and take strict action.”

On Monday, the authorities, including the CBC, Sindh government and police personnel instantly responded to Akram’s tweets and cleaned the beach from the Village Hotel to McDonald’s.

Sindh Chief Minister’s Adviser on Environment Barrister Murtaza Wahab, who reached the beach along with his team, pledged that his department would write letters to all hospitals, as well as federal and provincial departments to closely coordinate with his department. He added that the federal government, especially the Federal Minister for Maritime Affairs Syed Ali Haider Zaidi was not cooperating with the provincial government.

When The Express Tribune tried to approach Zaidi for comment, his phone was attended by a subordinate, who repeatedly said that ‘Sahib’ was in a meeting.

Meanwhile, the Sindh government has District South Deputy Commissioner Salahuddin Ahmed to investigate the matter and present a report within seven days.