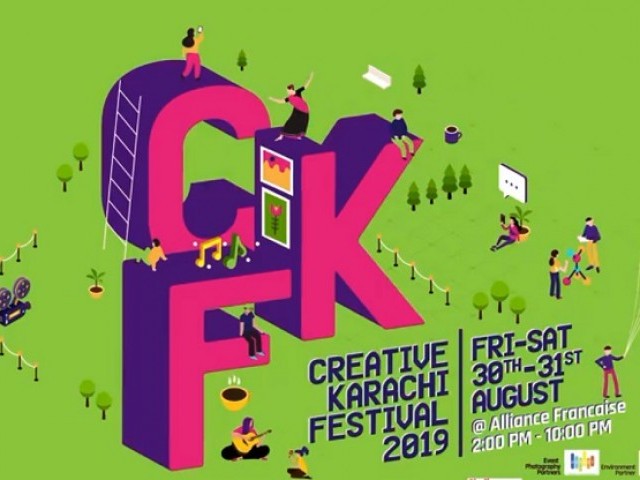 KARACHI: Given that it was the brainchild of Sabeen Mahmud, it was befitting that this year’s Creative Karachi Festival (CKF) had the tagline, “To Sabeen, with love.”

Through the continuation of projects like the CKF, it is clear that that team at The Second Floor (T2F) is committed towards preserving Mahmud’s legacy and carrying forward the work she began. In the same vein as previous iterations, the CKF continues to pride itself in providing a platform for emerging artists, musicians, writers, and filmmakers – and that is perhaps what sets it apart from other similar events that are gaining popularity in the city.

While the CKF does feature some familiar faces, it is clear that the organisers wish to turn the spotlight onto emerging talent and those who are in the initial years of their artistic journey.

And it seems to be working. The two-day event was not only well-attended, but the large number of youngsters in attendance was testament to the fact that the CKF has successfully tapped into a wider age demographic.

As a result, the Alliance Française found itself transformed into a veritable concert hall, a cinema, a dance floor, an art gallery, and a food bazaar all at once. While critically acclaimed and lauded films such as Kamal Khan’s Laal Kabootar were screened at the festival, the majority of the screenings were devoted to up and coming filmmakers who are gradually making their mark. Aymen Rizwan and Shams Pasha’s film Mabel Aur Main, based on the writings of Patras Bokhari, stood out in particular for its nuanced performances and quietly impressive cinematography.

On the musical front, the CKF tried to blend the traditional with the modern by having the qawaal group of Subhan Ahmed Nizami performing in the inner courtyard while the likes of the Karachi Jazz Band and Ahsan Bari and friends regaled audiences in the outer courtyard, ensuring that there was something on offer for everyone.

The festival also featured several performers which the city of Karachi is quite familiar with, such as dancer Suhaee Abro and the National Academy of Performing Arts’ (NAPA) Dastaan Gohi troupe, while also giving the stage to a hip-hop dance group known as Anarchy, whose infectious energy certainly captured the imagination of a receptive crowd.

Perhaps one of the most illuminating sessions at the CKF was one which not only marked the Pakistan release of the non-fiction book Sita Under the Crescent Moon but also celebrated the life of its writer, Annie Ali Khan, who passed away last year.

Poignant and heartfelt, the panel featured Zehra Nawab, Saman Ghani Khan, a video message from the book’s editor, Manan Ahmed, and a reading from the book by Nimra Bucha.

Both Nawab and Saman reminisced about their interactions with Annie over the years and the steadfastness with which she had carried out her journalistic pursuits, which often led her down previously untraveled paths.

Bucha’s recitation of a short poem written by Annie titled ‘Sans Lo’ (Breathe) was particularly stirring, especially paired with the images of Annie which were playing on a screen in the background. Ahmed stated that it had been imperative for him to preserve and stay true to Annie’s narrative voice while editing the book which follows Annie on her travails alongside female devotees of the Hindu goddess, Sita. But the book not only revolves around this one journey because Annie’s own previous memories and experiences are interwoven throughout the narrative.

Given the sheer number of activities that the CKF aims to incorporate under its roof, one can often be spoilt for choice, but it does ensure that one is never left wanting. By giving a platform to a bevy of emerging artists, the third incarnation of the CKF ensured that it continues to foster the spirit which Mahmud worked so hard to instill.