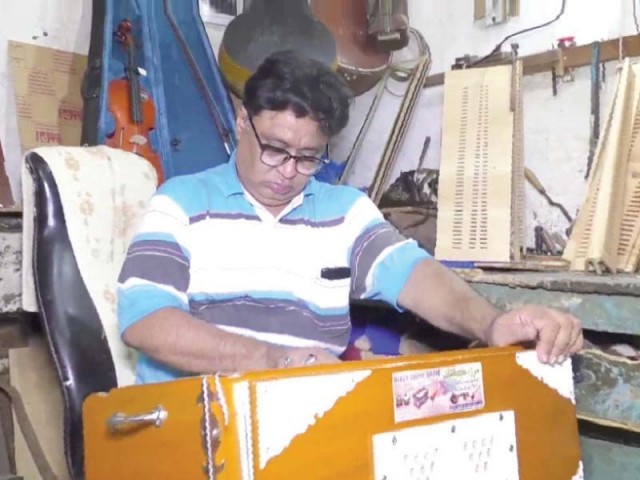 SAHIWAL: To make musical instruments from materials is an art itself. Very few of such ‘instrument magicians’ remain. However, in Sahiwal, one man has been making traditional musical instruments, including harmoniums, for some of the greatest artists of our time.

Mirza Abdul Qadir has been making instruments for over thirty years. His entire family is involved in the trade, which has been passed down through the generations.

Some of the people he has learnt these skills from include renowned harmonium maker Mohammad Ikhlaq and Sufi Abdul Khaliq. As a result, he has made musical instruments for superstars such as Nusrat Fateh Ali Khan, Amjad Sabri and Sher Miandad.

After the partition of the subcontinent, the first tanpura, a long-necked stringed instrument, played on Radio Pakistan, was built by his family.

Speaking to The Express Tribune, Mirza Abdul Qadir states that his family has been making musical instruments since the Mughal era. “The first tanpura played on Radio Pakistan, Lahore, after independence, was made by my elders,” he boasts.

However, with the passage of time, traditional music has been replaced with English melodies as well as music from the world over. “The use of traditional musical instruments such as sitar, sarangi and harmonium has seen a steep decline,” says Qadir.

The only thing that keeps us going is the will to keep the traditions of our ancestors alive. Otherwise, it has become very difficult for us to make ends meet, he adds.

But the glory of days past has been marred by the fact that the income earned from this trade is no longer sufficient to support a family. Despite this brutal reality, Qadir still continues to being strings and wood alive with the sound of music, hoping to keep one of the traditions of the subcontinent alive with his work.

He urges the government to develop a strategy for such artisans so that they are able to keep such traditions alive while simultaneously being able to support their households.