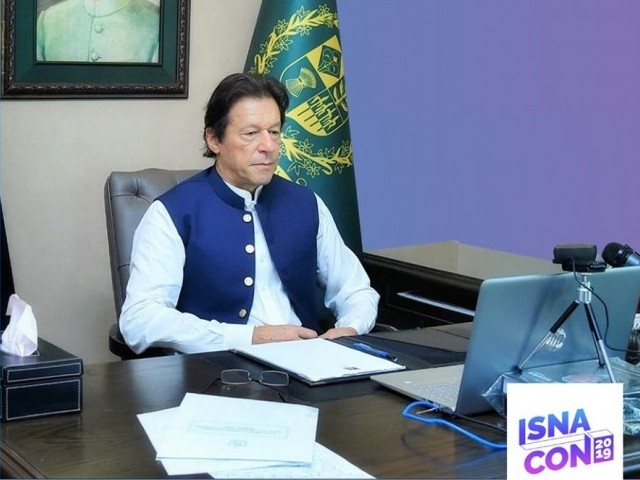 Prime Minister Imran Khan has once again urged the international community to recognise the grave threat to regional and world peace posed by a nuclear-armed India “taken over by the Hindu supremacist group, Rashtriya Swayamsevak Sangh (RSS)”.

In his address via video link to the Islamic Society of North America (ISNA) in Houston on Sunday, the premier said Indian Prime Minister Narendra Modi and the ruling Bharatiya Janata Party (BJP) were devout followers of the RSS ideology of hatred and racism.

He said this extreme ideology was the basis of India’s illegal annexation of occupied Kashmir. “Kashmiris have been under siege for the past 28 days. This is the same RSS philosophy which led to the massacre of Muslims in the Indian state of Gujarat.”

PM Imran said the whole of India is in the grip of an extremist ideology that is threatening the very fabric of Indian society.

“We are talking about a country of over a billion people with nuclear weapons taken over by an extreme ideology. All minorities are now being systematically targeted in India.”

The premier reiterated that India had lost its secular outlook as the Modi government had made clear its intent to change the demography of Kashmir through ethnic cleansing of Muslims.

“Indian forces have detained the Kashmiri leadership and thousands of Kashmiris have been arrested. The citizenship of nearly two million people in the Indian state of Assam has also been revoked. This is all in line with the RSS belief that there should only be Hindus in India,” said PM Imran.

He added that India might try to pull off another false flag attack on the lines of Pulwama to divert the world’s attention from occupied Kashmir. “If India does anything like that, we will give them a befitting response,” said the PM.

He urged the international community to fulfill its responsibility of ensuring a peaceful resolution of the Kashmir issue. “India’s illegal Kashmir move has brought two nuclear-armed countries to the brink of confrontation. We have requested the Organisation of Islamic Cooperation (OIC) to play its role and I will now raise the issue at the upcoming UN General Assembly session in New York,” he said.

He said that after 9/11 every Muslim in the West was viewed with suspicion, adding that the term ‘Islamic terrorism’ was to blame for the Islamophobia rampant in today’s world.

“Islamophobia is to blame for the attacks on Muslims in Europe and around the world, including the recent attack on a mosque in Christchurch,” said the premier, while urging ISNA members to use their platform to address misconceptions in the Western world about Islam and Muslims.