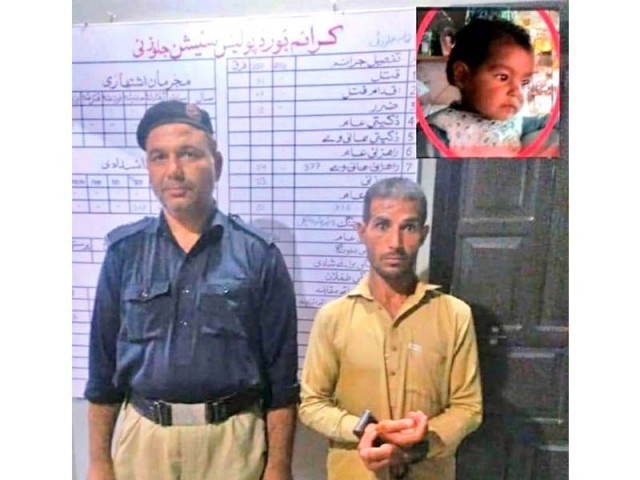 PESHAWAR: It is widely understood that poverty and violence go hand in hand but nowhere does this idea ring truer than in the home lives of those born destitute. While the better off among us take for granted the comforts of our residences, the violence that poverty begets follows those less fortunate to home in the form of domestic hostility that at times can turn fatal.

The story of two-year-old Aiman is just one of the many such cases of fatal domestic violence triggered by crippling poverty. The infant girl was murdered by her own father, her body dumped next to a hill on the outskirts of Nowshera. As he confessed to the crime upon arrest, he claimed poverty and family arguments led him to commit the heinous deed, police officials said.

An off and on labourer by profession, Aiman’s father Hasan Muhammad married his wife in 2008 and left for Dubai just 15 days later in search of greener pastures. But six years in the United Arab Emirates failed to turn Hasan’s fortunes around and he returned to Nowshera as financially unstable as he was when he left, according to Investigation Officer Salim Khan, who looked into the case.

The first two years back home were tough for Hasan as he was unable to gain employment, Salim said. When he finally did find work, it was at a hotel for a meager Rs12,000 a month salary. Hasan was unable to hold that job long and subsequently worked on and off, often living penniless, the officer added.

Back at home, Hasan’s inability to find work wreaked havoc on his familial life. “He often fought with his wife over financial issues. In his confession, he admitted that just six months before he murdered Aiman, he threatened his wife that he would kill both of them to ‘free himself of any worries’,” Salim told The Express Tribune.

When he finally did act on his threat, Hasan tried to get away with his daughter’s murder by claiming she was kidnapped. “He told his family that some random stranger had kidnapped Aiman. They even registered an FIR with us,” Deputy Superintendent of Police (DSP) Khalid Khan said. “But in actuality, it was Hasan himself who abducted the two-year-old from their home. He took her to the hill on the outskirts of Nowshera, where we found her body, and strangled her himself.”

According to both officers, police began acting on the FIR by recording the statements of Aiman’s mother and other residents of the area they lived in.

When the statements failed to yield any evidence, they listed Hasan and other members of his families as potential suspects. After coming across some clues that pointed to Hasan as the culprit, police investigators interrogated him and he confessed to heinous crime. A local court has now sent Hasan to jail, the officers added.

Talking to The Express Tribune, Saima, an activist and manager of an NGO working for women’s rights in K-P, said the incident both highlighted how poverty translates into anger and even derangement, and how women and girls often bear the brunt of the violence it triggers.

“Many sections of our society continue to view and treat women – be they mothers, sisters, wives or daughters – as a burden and as a result, they are often subjected to both physical and emotional torture,” she lamented. “We need to include women’s rights into the national curriculum so that the next generation of Pakistanis can move beyond this attitude,” she suggested. She also called for strongly enforcing existing laws pertaining to women and enacting new ones to prevent incidents like Aiman’s murder.