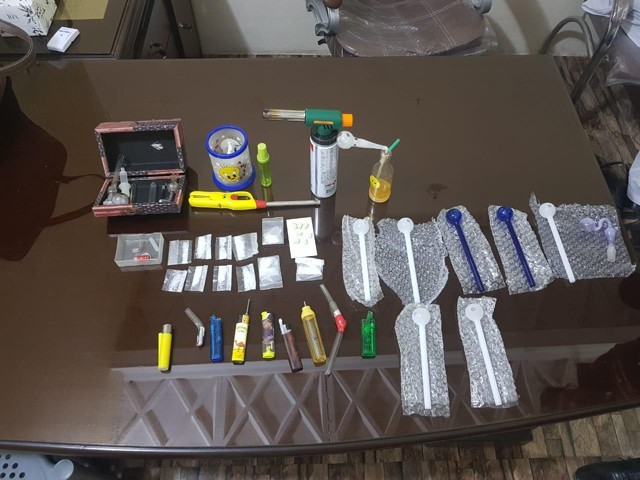 Gang aimed to lure students and those belonging to well-to-do families through WhatsApp groups. PHOTO: EXPRESS

KARACHI: Police arrested the leader of a gang involved in drug dealing along with four of his accomplices, including a policeman, in Karachi’s Soldier Bazaar area on Sunday.

Briefing the media, SSP Karachi East Ghulam Mahesar said those arrested were involved in selling crystal meth — also know as ice– heroin, cocaine, as well as, other drugs in the city.

He said that a policeman identified as Mussadaq Shah, who was posted at the the City Courts Police Station, was also taken into custody.

Afridi is believed to be one of the major drug dealers operating in Karachi. He is also known to have had a network of 15 drug dealers and peddlers with both men and women on his payroll.

“Him [Afridi] and other members of the gang were taken into custody previously too from Darakhshan, Gizri, Bahadurabad, Brigade and Firozabad areas but had been granted bail,” the police spokesperson said.

Afridi would run his business through online messaging application WhatsApp, he added.

The gang aimed to lure students and those belonging to well-to-do families. Through the WhatsApp group, they would invite students to dance parties where they would experiment with these drugs.