Bale and James start but Madrid held by Valladolid

5 natural drinks that will help you lose belly fat

Hundreds of new fires in Brazil as outrage over Amazon grows

This fire, one of hundreds burning in the Amazon region, was photographed about 65 kilometers (40 miles) from Porto Velho in northern Brazil's Rondonia state, on August 23, 2019. (Photo: AFP)
PORTO VELHO:

Hundreds of new fires are raging in the Amazon rainforest in Brazil, official data showed Saturday, as thousands of troops were made available to help fight the worst blazes in years following a global outcry. 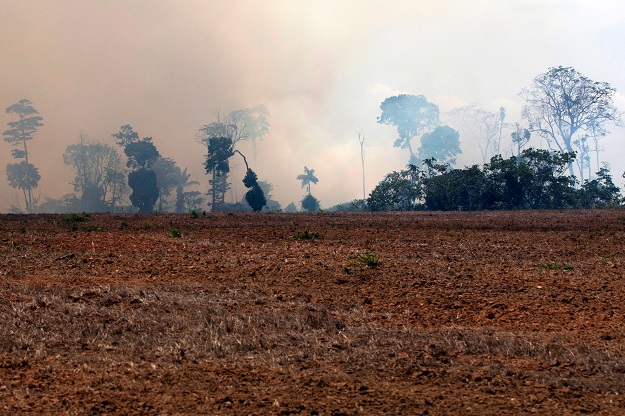 A smoke cloud is seen over a burnt area after a fire in the Amazon rainforest. PHOTO: AFP

Multiple fires billowing huge plumes of smoke into the air were seen across a vast area of the northwestern state of Rondonia on Friday when AFP journalists flew over the area. 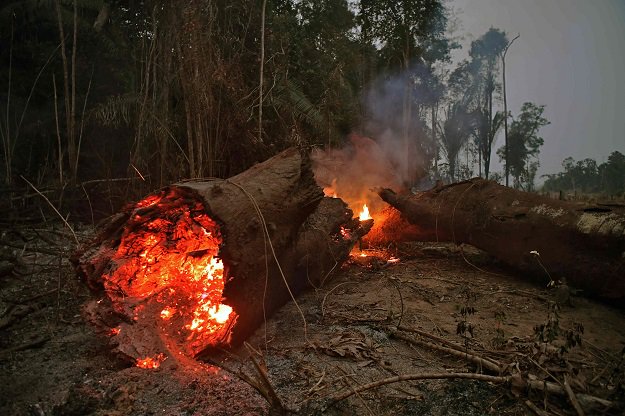 
Several residents in the capital, Porto Velho, told AFP on Saturday that what appeared to be light clouds hanging over the city of half a million people, was actually smoke from the blazes that had scorched swaths of land and left tree trunks smouldering on the ground. 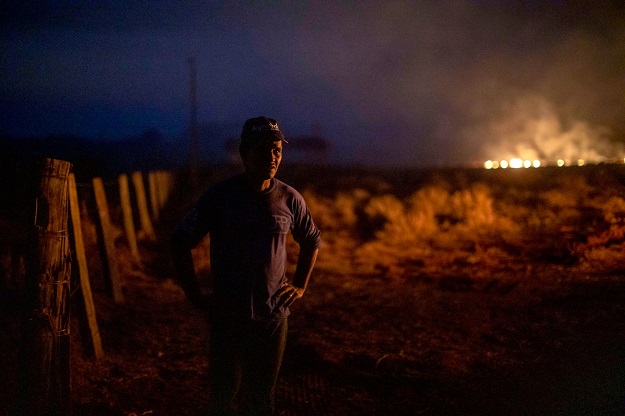 Brazilian Neri dos Santos, 48, looks at a fire at the farm where he works in Nova Santa Helena municipality, Mato Grosso state, in the Amazon basin, Brazil. PHOTO: AFP

"I have a daughter with respiratory problems and she suffers more because of the fires."

The fires in the world's largest rainforest have triggered a global uproar, and are a major topic of concern at the G7 meeting in Biarritz in southern France. 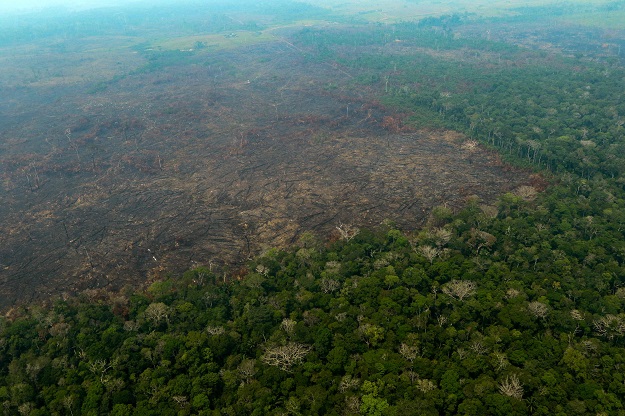 Why is part of the Amazon burning?

Official figures show 78,383 forest fires have been recorded in Brazil this year, the highest number of any year since 2013. Experts say the clearing of land during the monthslong dry season to make way for crops or grazing, has aggravated the problem. 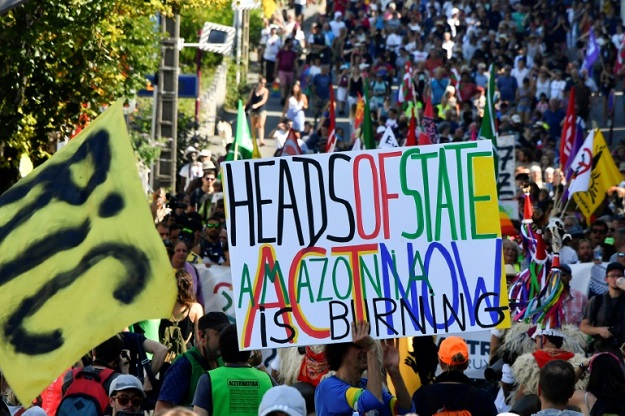 Protesters in the French city of Hendaye hold a sign intended for world leaders meeting at a G7 summit in nearby Biarritz; it reads 'Heads of State, Act now, Amazon is Burning' (Photo: AFP)

More than half of the fires are in the massive Amazon basin, where more than 20 million people live. Some 1,663 new fires were ignited between Thursday and Friday, according to Brazil's National Institute for Space Research (INPE).


The new data came a day after Bolsonaro authorized the deployment of the military to fight the fires and crack down on criminal activity.


Seven states, including Rondonia, have requested the army's help in the Amazon, where more than 43,000 troops are based and available to combat fires, officials said. Firefighters and planes are also being deployed. 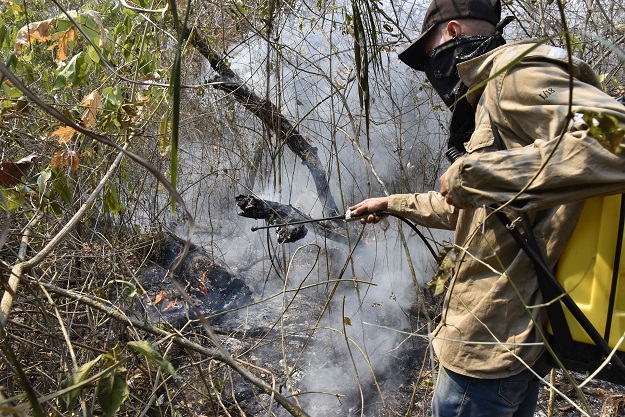 Six aircraft, including two Hercules C-130s equipped to carry 12,000 litres of water each, have been sent to Rondonia to fight the fires. They are expected to be joined by 30 firefighters on Sunday.

US President Donald Trump and British Prime Minister Boris Johnson, both attending the G7 summit, have offered their countries' assistance in fighting the fires.

"Any help is welcome in respect to the fires," Brazil's Defense Minister Fernando Azevedo e Silva told reporters on Saturday.

The blazes have stirred outrage globally, with thousands of people protesting in Brazil and Europe on Friday. More demonstrations are planned in Brazil on Sunday. 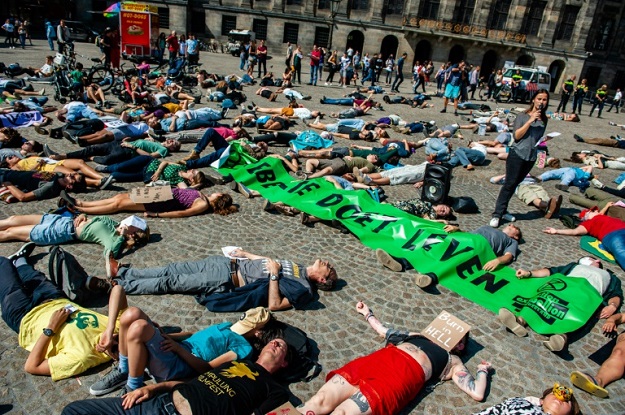 Demonstrators around the world, including these in the Netherlands staging a "die-in," called on Brazil to act to protect the Amazon rainforest. (Photo: AFP)

Earlier this week, Bolsonaro, whose anti-environment rhetoric since coming to power in January has been blamed for harming the Amazon and indigenous tribes, accused non-governmental organizations of deliberately starting the fires after their funding was cut.

The growing crisis threatens to torpedo a blockbuster trade deal between the European Union and South American countries, including Brazil, that took 20 years to negotiate.

European Union Council President Donald Tusk told reporters at the G7 on Saturday that it was hard to imagine European countries ratifying a trade pact with the Mercosur bloc as long as Brazil fails to curb the fires ravaging the Amazon, which is known as the "lungs of the planet" because of its crucial role in mitigating climate change.


French President Emmanuel Macron, who has taken the lead in pressing his Brazilian counterpart over the fires, had earlier accused Bolsonaro of lying to him about Brazil's stance on climate change.


In an escalating war of words between the two leaders, Bolsonaro denounced what he calls Macron's "colonialist mentality."

As Amazon burns, Brazil's Bolsonaro tells rest of world not to interfere

Environmental specialists say the fires are coming amid increasing deforestation in the Amazon region, which in July took place at a rate four times that of the same month in 2018, according to data from INPE.

Bolsonaro has previously attacked the institute, describing its data as lies and engineering the sacking of its head.

On Friday, he insisted that the fires should not be used as an excuse to punish Brazil.

"There are forest fires all over the world, and this cannot be used as a pretext for possible international sanctions," Bolsonaro said. 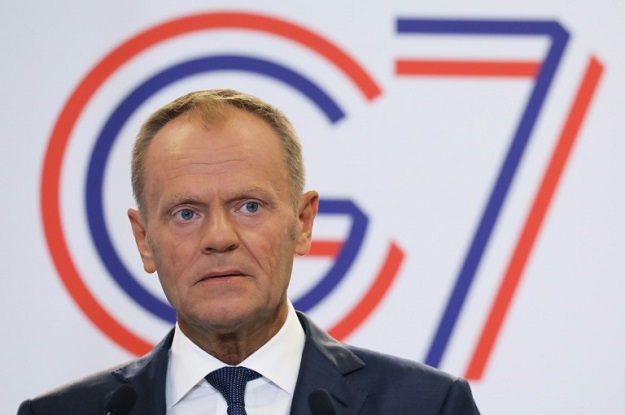 
Brazil's powerful agriculture sector - which strongly supports Bolsonaro - has expressed concerns over the president's rhetoric, fearing boycotts of their products in key markets.

In an editorial Saturday, the respected Folha de S.Paulo newspaper warned that Bolsonaro's "bravado" had worsened the crisis caused by accelerating deforestation.


"The damage to [Brazil's] image is done, and it could have important trade repercussions," it said.

"Nationalistic bravado will not win the game this time."