KARACHI: Chief of his own faction of All Parties Hurriyat Conference (APHC) Syed Ali Shah Geelani, who is under house arrest in occupied Kashmir, has written a letter against changing the constitutional status of IOK, imposition of curfew and atrocities being committed by the Indian forces to the Kashmiris and Ummah that the whole of the disputed territory has been “transformed into a jail”.

“Dividing Kashmir into two parts is a joke with democracy,” stated the Hurriyat leader in the letter.

In the letter, Geelani urged the Kashmiris to stand up to the Indian brutalities.

He also urged the Pakistan government, its people and the Ummah to come to the aid of the Kashmiris as the lockdown continued for the 21st day.

“Today Kashmir is under lockdown, valley has been transformed into a jail, communications system is closed and thousands of youth have been arrested,” stated Geelani.

“Not only have they blocked the entire communications system used by the common people since the beginning of the month, but they have also gagged local reportage and news media without any formal declaration,” he said.

“No news about the brutalities and repression being committed by the Indian armed forces as well as the killings and arrests of thousands of youth are being published. Common people are unable to know about their kith and kin.

“The oppressors might try to hide reality, but history will not spare anyone. The blank pages will speak loudly,” he said.

Geelani said IOK’s autonomy has been stripped to “change Kashmir’s demography and make it one of India’s colonies”.

The APHC chief said despite New Delhi’s attempts to mask its atrocities, not only the international community, but the voices within India had denounced the Kashmir move. “Courage, patience and discipline are those weapons of defenceless people which can defeat the enemy with howsoever enormous an arsenal,” said Geelani.

After being sent back from Srinagar, Rahul Gandhi admits situation in Kashmir ‘not normal’

On the irony behind the world’s largest democracy’s undemocratic move, Geelani said it was unfortunate that “instead of mourning this murder of democracy, the people of India have celebrated the decisions of their government”.

In the five-point agenda, the APHC chief asked all Kashmiris to continue resistance by holding peaceful protests, saying the government officials and bureaucrats should realise that they were oppressing their own people and were being used by the Indian state.

“The long-standing agents of India and the opportunist merchants of the Kashmiris’ sacrifices were shown their true dispensable worth and put into protective custody.

“Even those who would never tire of flaunting their pro-India credentials and ties to the Indian system have realised that the Indian state does not care about the lives of the Kashmiris, but is only interested in occupying our land whatever the cost,” he said. “The rulers from Delhi are drunk in power and arrogance of majoritarianism and they have snatched away all percepts of humanity, ethics and democracy.” 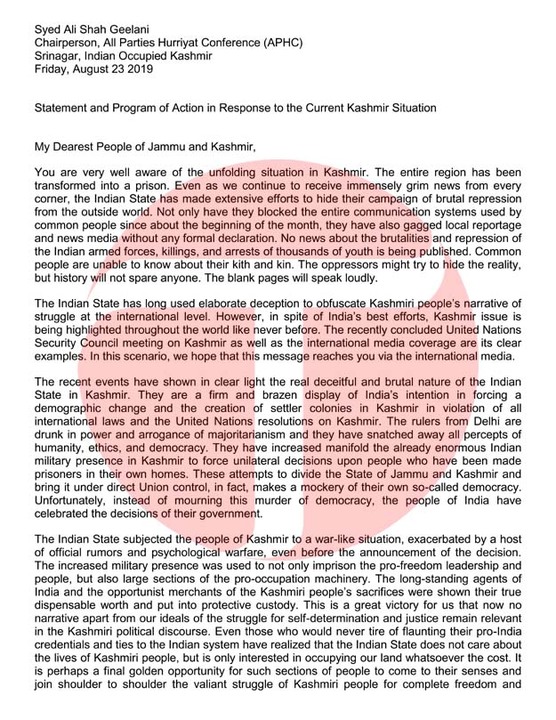 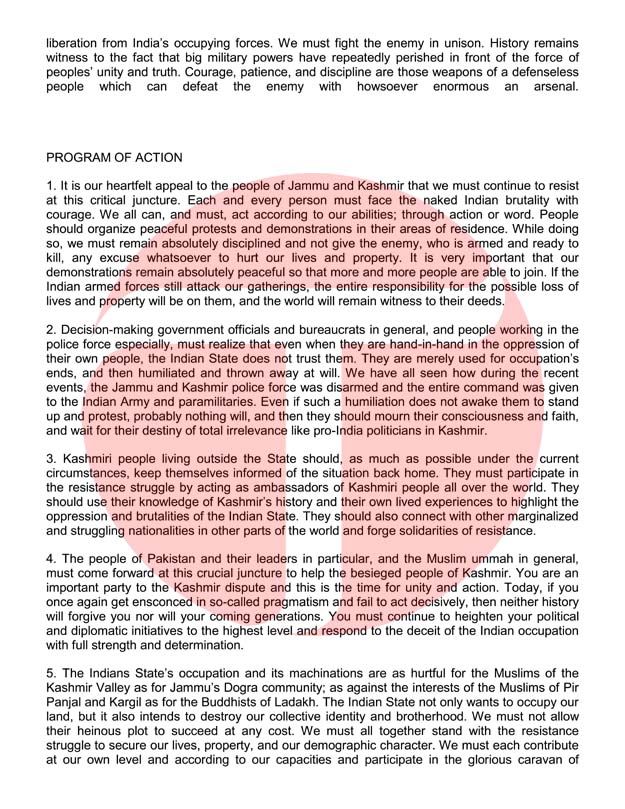