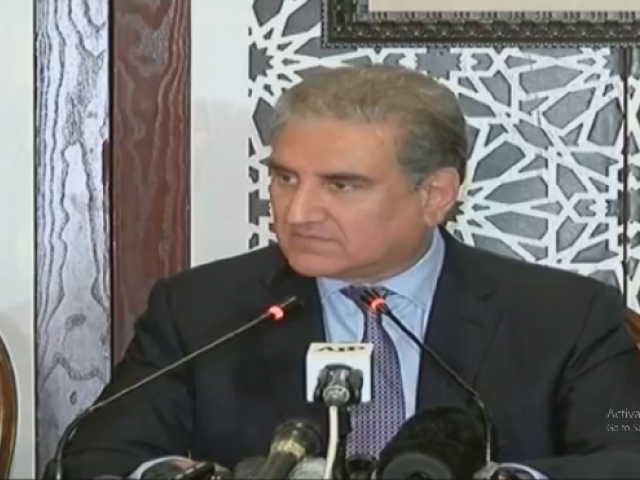 ISLAMABAD: Foreign Minister Shah Mehmood Qureshi on Friday challenged India to lift curfew in occupied Kashmir and asked Prime Minister Narendra Modi to hold a meeting in Srinagar “if all is well” in the valley after New Delhi scrapped the special status of the disputed territory.

“Why there is a curfew, why there is a media blackout, why no one is sending their children to school, why so many restrictions are in place if everything is fine in Kashmir,” asked Qureshi while briefing heads of diplomatic missions at the Foreign Office.

The diplomatic corps based in Islamabad was invited for second time since India stripped occupied Kashmir of its special status by revoking Article 370.

The foreign minister told diplomats that contrary to the Indian claims, the situation, according to information gathered by Pakistan, was ‘very grave’ in the scenic region.

He challenged the Indian narrative that there was no major protest happened in the wake of abrogation of Article 370.

“If everyone is happy with the Indian government’s decision, then why not Modi visits Srinagar and holds official meetings there,” the foreign minister asked, adding the fact India had imposed a clampdown and sent tens of thousands of troops to the dispute territory was enough to prove that people of Kashmir had totally rejected New Delhi’s decision.

He went on to say that at least half a dozen petitions had already been filed before the Indian Supreme Court challenging the decision of Indian government.

This, according to Qureshi, indicated that even people within India were opposing Modi government’s decision on Kashmir.

He briefed the diplomats about Pakistan’s perspective on the brewing tensions with India. Qureshi told them that Pakistan always wanted to resolve Kashmir and other issues with India through peaceful dialogue. But, New Delhi repeatedly rebuffed Pakistan’s peace overtures, he regretted.

He said war was not an option, adding any nuclear conflagration would be suicidal.

Meanwhile, as part of continuing diplomatic outreach, Qureshi on Friday addressed another letter to the UN High Commissioner for Human Rights drawing her attention to the several facets of the seriously deteriorating human rights and humanitarian situation in Indian Occupied Kashmir (IOK).

The letter highlights in detail the context and consequences of India’s illegal and unilateral actions of 5 August.

The letter articulates Pakistan’s deep concerns over the intensification in human suffering, further breach of the fundamental rights of the Kashmiri people, and the dire humanitarian situation that has arisen as a result of India’s enhanced draconian measures to implement its illegal actions.

The foreign minister has underlined the imperative for the world community, including the United Nations, to call upon India to rescind its unilateral actions, lift the curfew and other draconian measures, and restore fundamental rights of the Kashmiri people.

The letter is being shared with the UN Security Council and all members of the United Nations.

Qureshi had earlier written to the High Commissioner for Human Rights on 4 August 2019 and also held a telephonic conversation with her on 8 August.