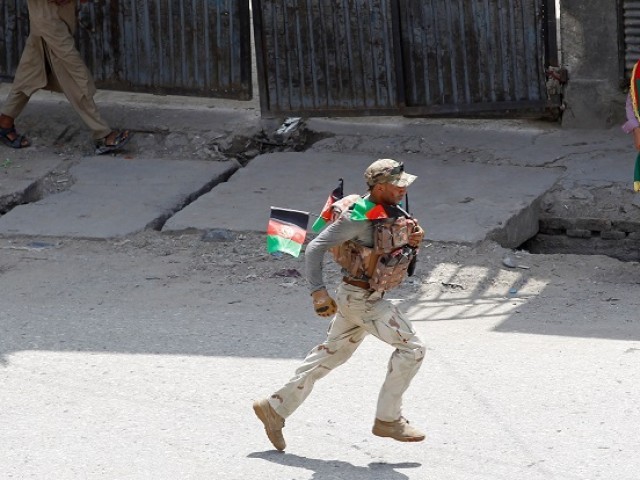 KABUL: A series of bombings struck restaurants and public squares on Monday in the eastern Afghan city of Jalalabad, wounding at least 66 people, officials said, as the country marked the 100th anniversary of its independence.

No group claimed responsibility for the 10 bombs but the militant Islamic State (IS) group and the Taliban militants operate in the area.

IS claimed responsibility for a weekend bomb attack on a wedding reception in the capital, Kabul, that killed 63 people and wounded nearly 200.

The Jalalabad bombs were planted near a market where hundreds of people had congregated after attending Independence Day events.

Ghulam Mohammad, a shopkeeper selling plants, said his two sons and a nephew were among the injured in a blast at the market square. “Children insisted on being in the shop, as they wanted to celebrate Independence Day in the market, but they were seriously injured when a bomb exploded,” Mohammad said at a hospital in the city. 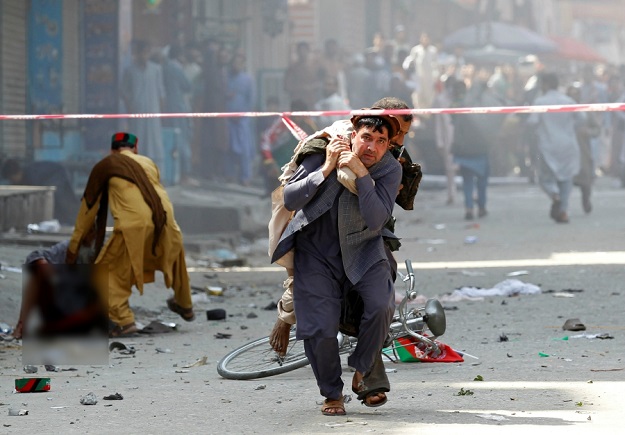 A man carries a wounded person to the hospital after a blast in Jalalabad, Afghanistan. Photo: Reuters

Independence day ceremonies were disrupted in Mehtralam, the capital of the eastern province of Laghman, when militants hit a celebration venue with five rockets, officials said, adding that six civilians were injured.

“The formal ceremony had ended,” said Assadullah Dawlatzai, a spokesman for the provincial governor. “People were being served lunch when the rockets landed. Unfortunately, six civilians were wounded.”

President Ashraf Ghani, in an Independence Day address in Kabul, called on the international community to stand with Afghanistan to eradicate the militants’ “nests”.

“Our fight against the Daesh will continue,” he said, referring to IS. “The Taliban have laid the foundation for such brutal killings.”

In the speech, Ghani did not refer to negotiations between the United States and the Taliban on a deal by which US troops can withdraw in exchange for Taliban security guarantees.

The United States also wants a Taliban commitment on power-sharing talks with Ghani’s government and a ceasefire.

The Taliban have refused to talk to the government.

But there are concerns among Afghan officials and US national security aides about a US withdrawal, with fears Afghanistan could be plunged into a new civil war that could herald a return of Taliban rule and international militants, including Islamic State, finding a refuge.

US President Donald Trump hopes to withdraw all American troops from Afghanistan before the 2020 presidential election. Trump on Sunday called the Kabul bomb attack horrible and expressed optimism about the talks.

He said the United States would seek to get troop levels below 13,000 but leave behind “very significant” intelligence capabilities.

The US troops in Afghanistan train and advise Afghan security forces and conduct counterinsurgency operations.  The Taliban said in an Independence Day statement they looked forward to the departure of all foreign forces.

“The day approaches closer when these invaders shall completely leave our country, akin to the British and Soviets before them,” they said.

While never part of the British empire, Afghanistan gained complete independence from Britain on August 19, 1919.

Independence day ceremonies in Kabul were curtailed out of respect for those who died in the Saturday night bomb, the government said.