Opposition to chalk out IOK, political plans at APC today

Opposition to chalk out IOK, political plans at APC today

Shehba­z, Bilawa­l will be unable to attend the huddle­
By Our Correspondents
Published: August 18, 2019
Tweet Email 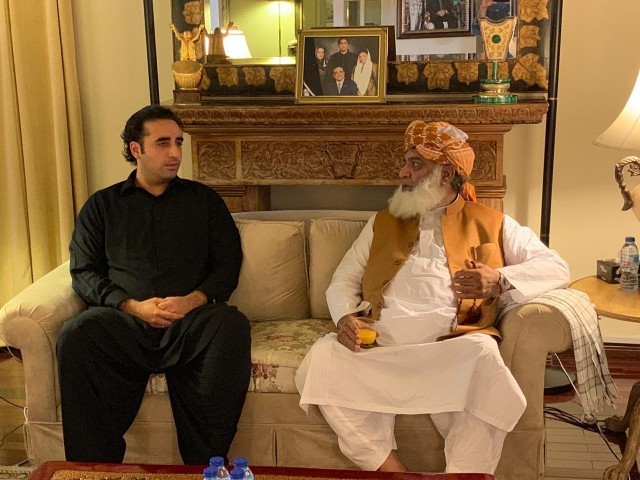 ISLAMABAD: The joint opposition’s all parties conference (APC) will be held on Monday (today) is Islamabad at the residence of Senator Talha Mahmood of the Jamiat Ulema-e-Islam-Fazl (JUI-F).

The conference, presided over by JUI-F chief Maulana Fazlur Rehman, will chalk out a joint strategy of the opposition parties on the situation in Indian Occupied Kashmir in the wake of New Delhi scrapping the semi-autonomous of the disputed territory and imposing a curfew and communications blockade there since August 4.

The participants will also try to remove the misunderstandings that developed between the main component parties of the alliance, the Pakistan Peoples Party (PPP) and the Pakistan Muslim League-Nawaz (PML-N), following the joint opposition’s failure to unseat the Senate chairman through a no-confidence motion.

PML-N President and Leader of the Opposition in the National Assembly Shehbaz Sharif will not be able to attend the conference because of a back injury he suffered during the Independence Day celebrations. He has been advised by doctors to rest. However, a delegation of the party comprising senior leaders including Khawaja Asif, Ahsan Iqbal and Ayaz Sadiq will participate in the conference.

PPP Chairman Bilawal Bhutto Zardari will also not attend the huddle because of a previously scheduled trip to Skardu. The PPP delegation that will participate in the conference comprises party leaders Nayyar Bukhari, Yousuf Raza Gilani, Sherry Rehman and Farhatullah Babar. Bukhari, the PPP’s general secretary, will leave for Skardu the next day after attending the conference.

The JUI-F chief met Bilawal at Zardari House in Islamabad on Sunday night and informed him about the agenda of the APC. The two leaders also exchanged views on the political situation.

The JUI-F chief is apparently holding the APC to send a message to the government that the opposition alliance was still intact.

Bilawal supports PM Imran’s efforts to ‘engage with the world’

The joint opposition’s Rahbar Committee had recently agreed on identifying the 14 opposition senators who did not vote in favour of the no-trust motion and take action against them. It is also considering moving another no-confidence motion against the Senate chairman.

The PPP has formed a fact-finding committee, including Yousuf Raza Gilani, Farhatullah Babar, Nayyar Bukhari, Sabir Baloch, Saeed Ghani, to identify the 14 senators, who voted against their own parties’ no-confidence motion.

Similarly, the PML-N is also holding an internal inquiry to identify the defectors.

Despite having a majority in the Senate, the joint opposition failed to unseat the chairman of the house, Sadiq Sanjrani, bagging only 50 votes — three short of the required number – in their no-confidence motion.

According to the results of the secret ballot, 50 senators cast their votes in favour of the motion, 45 against it and five votes were rejected — a major blow to the joint opposition, which was expecting to sail through believing that at least 63 senators were firmly under their belt.

Interestingly, the opposition’s resolution, tabled earlier, to move the no-confidence motion against the Senate chairman was passed with 64 senators voting in its favour.

The PML-N and PPP grew suspicious of each other following the joint opposition’s failure to unseat the Senate chairman.

The cracks laid bare when senior PML-N leader Khawaja Asif doubted the possibility of his party’s alliance with the PPP lasting for long.

“You will soon see fissures in the alliance. Mistrust between the two parties [PML-N and PPP] is growing and I think it will further increase in the coming days,” he maintained.

The PML-N leader also hinted that the PPP had betrayed the other opposition parties in the no-trust motion. “They [PPP] don’t want to lose the Sindh government. We have nothing to lose.”

In response, PPP Senator Sherry Rehman expressed her disappointment and said Asif’s comments were tantamount to “smashing the opposition alliance into pieces”.

“The PPP entered into an alliance with the PML-N for the sake of democracy even though its activists were unhappy about it,” she said.

“The PML-N itself has been unable to keep its senators in check.”