The landsl­ide, which took place due to heavy rain, destro­yed four houses­
By ​ Our Correspondent
Published: August 17, 2019
Tweet Email 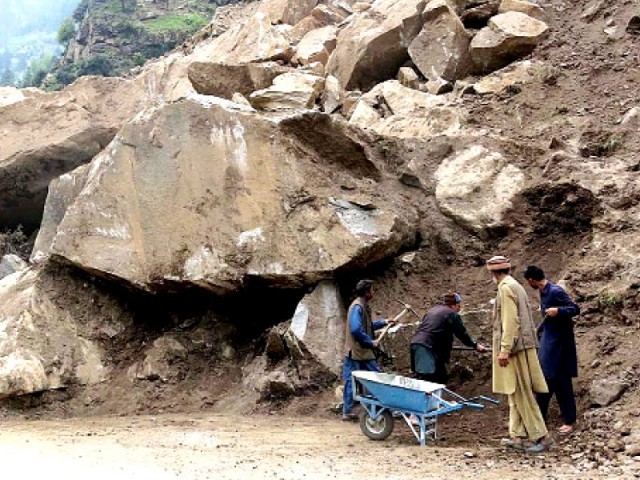 RAWALAKOT: At least seven people were killed after a landslide hit their houses in Rawalakot city of Azad Jammu and Kashmir (AJK), Express News reported on Saturday.

The landslide took place due to heavy rain and destroyed four houses. Several people were also injured in the incident.

“Rescue workers are searching for bodies buried in the landslide amid unusually heavy rain. Two bodies have so far successfully retrieved from the debris,” said assistant commissioner Rawalakot.

Meanwhile, heavy rain continued in parts of Punjab and Khyber-Pakhtunkhwa (K-P). Due to the rain, landslides were also expected in Hazara, Malakand division, Gilgit-Baltistan (G-B) and the mountainous region of the AJK.

At least 28 people had died and dozens more, including women and children, had gone missing after heavy rains and flash floods wreaked havoc in AJK’s Neelum valley last month.

Over 150 houses in the Laswa area were damaged while dozens of people were swept away in the floods caused by a cloudburst.