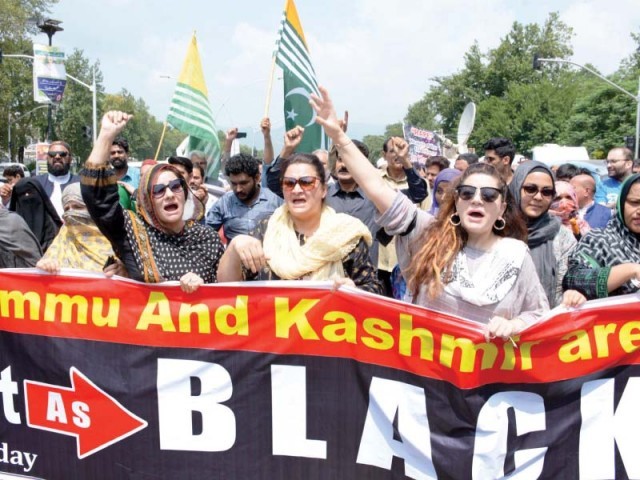 Protesters of the All Parties Hurriyat Conference (APHC) shout anti-Indian slogans during a protest rally in Islamabad . PHOTO: ZAFAR ASLAM/EXPRESS

ISLAMABAD / RAWALPINDI: Residents of the twin cities on Thursday poured into the streets to observe ‘Black Day’ against New Delhi’s decision to repeal Article 370 and enforce a brutal lockdown in Indian Occupied Kashmir (IOK).

Rallies were held outside the Foreign Office and the Indian High Commission in Islamabad while several programmes were held to highlight the Kashmir struggle.

In the garrison city of Rawalpindi, a rally was led by the Rawalpindi District Administration, including the Chief Commissioner Saqib Zafar, and Deputy Commissioner (DC) Ali Randhawa. The rally commenced from Kutcheri Chowk and made its way towards Ammar Chowk.

The participants held up black flags and sported black armbands to condemn the Indian oppression in IOK.

They chanted anti-Indian slogans and demanded an immediate end to the Indian occupation of Kashmir.

The rally started from Marir Chowk and snaked its way to the Rawalpindi Press Club as its participants chanted anti-Indian slogans. They held aloft the national and Kashmiri flags and wore black and green bands on their heads.

Addressing the gathering, Nadeem said that he was part of the Freedom Flotilla for Palestine and that now they will create a similar flotilla for Kashmir and that they will go to the Line of Control via road.

He said that India can try to stop them if it dared.

Nadeem added that Muslim leaders who were silent on Kashmir should listen to the voice of Muslims around the world. He further said that soon Kashmir will secure its independence and become a part of Pakistan.

Speakers at the rally said that no power on earth could stop Kashmiris from attaining freedom. They added that they were ready to sacrifice themselves for their Kashmiri brethren whenever signalled by their party leadership.

Hundreds of people gathered outside the Ministry of Foreign Affairs on Thursday afternoon to protest against Indian aggression and express their solidarity with Kashmir.

The rally was organised and led by Islamabad Deputy Commissioner Hamza Shafqat. Earlier, in a message on microblogging site Twitter, he had asked citizens of the federal capital to join the city’s administration at D-Chowk to express their solidarity with Kashmir.

“We are staging this rally to show the world that we care for Kashmir and that no one can take Kashmir away from Pakistan,” he said.

People gathered at the venue and told the media that they were surprised to see the turnout in the rally. They thanked the Islamabad Administration especially the DC for arranging such a gathering where people would show their love and solidarity for Kashmir.

Ministry of Kashmir Affairs and Gilgit-Baltistan in collaboration with National Institute of Folk and Traditional Heritage (Lok Virsa) observed a black day on Thursday.

In this regard, documentaries were screened on a large projector in the Heritage Museum Hall. The documentary highlighted the atrocities being committed by the Indian forces in IOK.

Moreover, a photographic exhibition was also held to showcase the plight of innocent Kashmiris, particularly pellet-gun-victims including women and children.

Banners inscribed with slogans in support of the Kashmir cause were also displayed across the Lok Virsa premises in Shakarparian.

The Rawalpindi Arts Council (RAC) also observed a ‘black day’ on Thursday against the Indian occupation in the region.

A black flag was hoisted on RAC’s roof to symbolise the rejection of Indian designs on Kashmir. A photographic exhibition was also held in the art gallery which showed the violation of human rights which has unfolded in the region.

The exhibition was inaugurated by RDA Chairman Arif Abbasi. More than a hundred pictures were showcased in the exhibition to highlight the grave human rights violations by Indian forces.

‘Pakistan may redeploy troops from Afghan border to Kashmir’

Addressing the inaugural ceremony, the RDA chairman said that freedom of Kashmir has become unavoidable and Pakistan has presented Kashmir’s case at every forum.

“The United Nations (UN) Security Council through several of its resolutions, has validated the Kashmiris’ right to decide their future through a fair and impartial referendum,” said RAC Director Waqar Ahmed.

Besides the photo exhibition, a protest walk was also arranged by the RAC which was started at the council and ended at Murree Road. The rally was led by the RAC director and participants were from civil society. They were holding banners and black flags and chanting slogans against Indian aggression.

WITH ADDITIONAL INPUT FROM DNA and APP