Deceas­ed’s family says they don’t know who killed their son and will not implic­ate anyone in the case
By ​ Our Correspondent
Published: August 15, 2019
Tweet Email 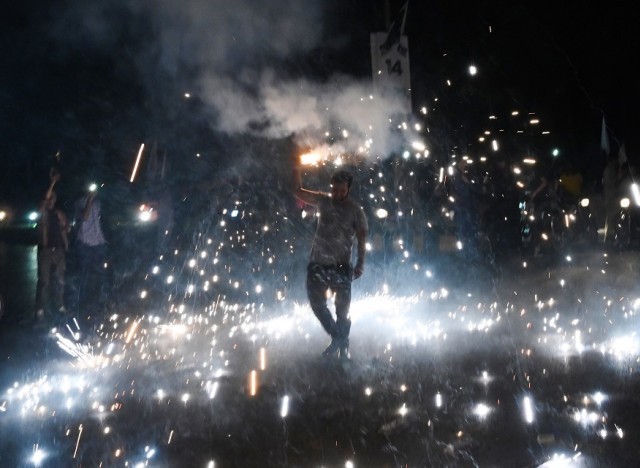 A child was killed and at least two people including a girl were injured by stray bullets as people in Rawalpindi opened aerial firing on eve of country’s 73rd Independence Day. Photo: AFP

RAWALPINDI: A child was killed and at least two people including a girl were injured by stray bullets as people in Rawalpindi opened aerial firing on eve of country’s 73rd Independence Day.

The garrison city echoed with a crackle of aerial firing and fireworks as soon as the date changed to August 14. The biggest display of fireworks was outside Lal Haveli, the residence of Railways Minister Sheikh Rasheed.

A number of citizens particularly children came out rooftops to witness a massive display of fireworks in the city. Meanwhile, in Naya Mohalla neighbourhood, a stray bullet hit five-year-old, Arham. The victim was immediately moved to the hospital however the doctors said he had died on the spot.

The victim’s uncle, Mazhar, told the media that he was clueless who fired the bullet that killed his nephew at around 4:30 in the morning. The family said they cannot nominate anyone in the case.

City Police Station SHO said they have registered a case of accidental death.

Later, CPO Faisal Rana, personally called Mazhar and asked him to submit a written application for legal progress which he refused. In Shahawala neighbourhood within the precincts of Bani police station, Ghazanfar Iqbal’s eight-month-old son, who was in his lap, was hit by a stray bullet. CPO sent SP Akram Khan Niazi to Iqbal’s house.

The victim’s father accused two brothers living next door for aerial firing which injured his son.

CPO ordered registration of a case under sections of attempt to murder and also issued a show-cause notice to related SHO and asked how aerial firing was done in his jurisdiction.

In Committee Chowk in the jurisdiction of Waris Khan police station, a bullet wounded 12-year old, Isha, who was shifted to DHQ. However, she was released after initial treatment.

Furthermore, 36-year old, Samiullah, was walking along the road when he was injured by a stray bullet.