WATCH: Woman ‘thrashes’ salesgirl at Lahore mall over 'not having a mirror'

WATCH: Woman ‘thrashes’ salesgirl at Lahore mall over 'not having a mirror'

In the viral video, the culpri­t can also be seen draggi­ng the salesg­irl by the hair
By ​ Our Correspondent
Published: August 13, 2019
Tweet Email 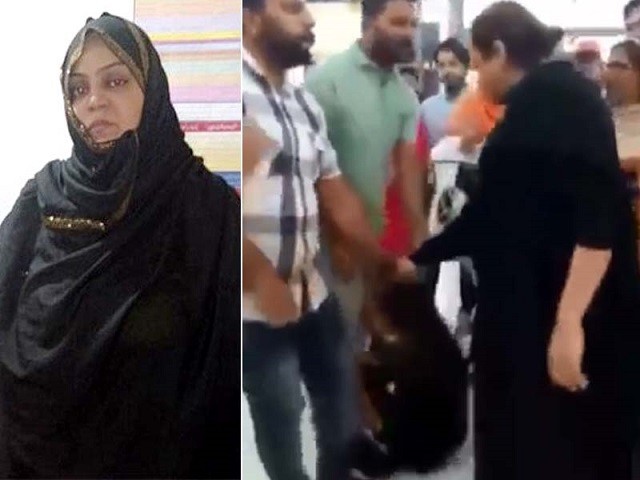 In the viral video the culprit can also be seen dragging the salesgirl by the hair. . SCREENGRAB: TWITTER/(PunjabPolice)

LAHORE: A week after a video of a woman thrashing a salesgirl at a shopping mall in Lahore over failing to bring her a mirror went viral, police arrested the alleged culprit on Tuesday.

Factory Area police took the suspect, identified as Sadaf Tariq, into custody for allegedly torturing the ‘victim’, Analiza, who works at a makeup shop at Packages Mall.

Sadaf went to a makeup outlet and asked for a lipstick which the salesgirl handed to her. The alleged culprit then told her to bring a mirror so she could see how it looks on her.

Analiza replied by saying that she did not have one on her and requested Sadaf to take it from another counter.

The woman then began insisting that she bring it for her.

The salesgirl, however, again told her she could not leave her counter as she was not allowed to do so.

In a fit of rage, Sadaf then grabbed the victim by the hair slapping and then dragged her on the floor.

In the footage, she can be seen shouting at the shop’s staffers and ordering Analiza to apologise.

In the case registered by the police, the mall’s security management said that Sadaf also attacked them with a paper-cutter in the presence of police personnel.

The Punjab Police issued a statement on Twitter, saying that Sadaf has been arrested.

She has been arrested https://t.co/UTkEsy1cBq

She has been arrested https://t.co/UTkEsy1cBq

This is not the first time that tempers have flared in shopping centres in the Punjab provincial city as last year a video of two women being beaten by shopkeepers for allegedly shoplifting began doing the rounds on social media.

A sales girl at packages mall was beaten up by this brutal woman just because she said she doesn’t have mirror!

What is wrong with people these days??? pic.twitter.com/KT2Uk5ZWla