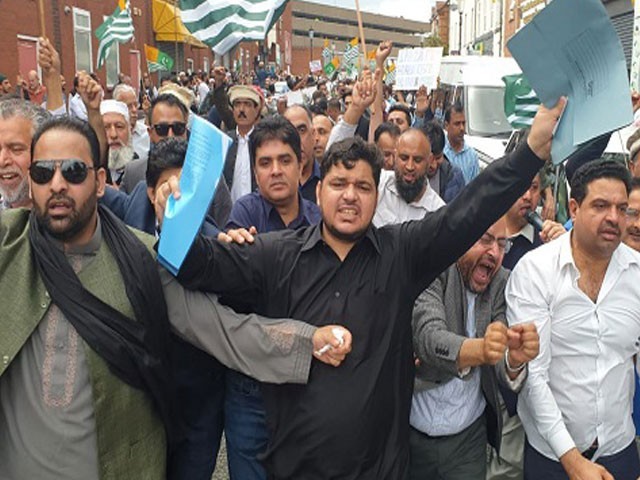 Hundreds of Pakistanis and Kashmiris in the UK chanted anti-India and pro-freedom slogans. PHOTO: EXPRESS

MUZAFFARABAD: As the lockdown in Indian-occupied Kashmir (IoK) continues, hundreds of Pakistanis and Kashmiris in the UK protested against the abrogation of the special status of the disputed valley near the Consulate General of India Birmingham.

People from all walks of life participated in the protest which was organised by Tehreek-e-Kashmir (TeK) UK and chanted anti-India and pro-freedom slogans.

Addressing the protest, TeK UK President Raja Fahim Kayani said, “The people of Britain will not rest until Kashmir is liberated from Indian occupation and genocide perpetrators are punished. Hundreds of thousands of Kashmiris have been killed in a ‘dirty war’ waged by the Hindutva forces only to quell legitimate their self-determination movement.” 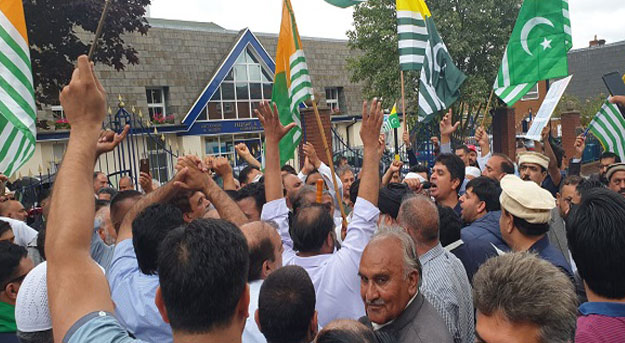 IoK has been under an unprecedented lockdown since August 5, when India revoked a special constitutional status dating back nearly 70 years. Pakistan, China and other regional leaders have warned of a backlash in the area.

Condemned India’s move to revoke Kashmir’s autonomy, Kayani said, “The abrogation of the special status of IoK is an act of ultimate aggression. India’s decision is part of the Bharatiya Janata Party (BJP) and MS Golwalkar ideologies that ensure the Muslims of India remain a second-class citizenry.”

Kayani added such attempts were an open contravention of the United Nations (UN) resolutions on Kashmir which prohibit any unilateral action to change the disputed nature of the Kashmir state.

“Indian government has announced Kashmir is no longer a disputed territory and will be merged with India. This will mean an end to the 70-year struggle for Kashmiris right of self-determination. It is time the world powers must realise that the right-wing agenda in India is paving a way to further the military conflict with Pakistan and China.” 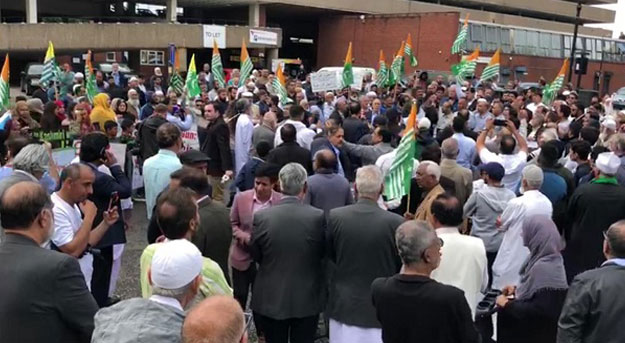 President TeK Europe Muhammad Ghalib said: “Indian decision on IoK comes alongside the deployment of 50,000 additional troops in the heavily militarised valley. Residents have been cut off from the rest of the world with no internet and mobile services. Tourists were asked to leave the area before a curfew was imposed. There is a humanitarian crisis in Kashmir. Indian actions represent an unprecedented escalation in hostility across the region.”

Ghalib urged the world to take serious note of the situation in occupied Kashmir.

A former member of the British parliament George Galloway also joined the protest and asked to hold a plebiscite in Kashmir.

The protesters later submitted a resolution at the Indian Consulate in Birmingham, demanding India to immediately lift the curfew from the IoK and stop human right abuses in the region.

In pictures: Day of prayer on Mount Arafat