Back from the brink

Back from the brink

There is someth­ing about Mian Said Ali that makes you like him. It is the gentle­ness in his ready smile, the humili­ty...
By Salman Rashid
Published: June 13, 2010
Tweet Email 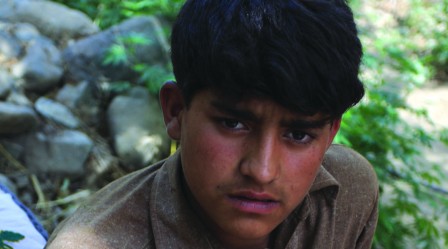 Gohar Ali: Barely into his teens and fending for his family.

There is something about Mian Said Ali that makes you like him. It is the gentleness in his ready smile, the humility of his demeanour and the matter-of-fact way he talks of his predicament that makes you warm up to him. There is also something that tells you that Said Ali can weather any storm without giving up.

A native of village Janu on the highroad from Khwazakhela (Swat) to Bisham and only a few kilometres outside the former, he suffered like so many others through the years of militant savagery. Yet he kept his smile.

Said Ali and his two brothers own 17 kanals (two and a bit acres) of agricultural land. Living together as a joint family, the brothers worked their holding together. Because it was spread over undulating ground, the land was terraced and unequally divided between fields for seasonal crops and orchards.

The brothers worked very hard to force two crops a year from this holding. They planted wheat in March, harvested it in August and then prepared the terraces for maize. In between they tended his 175 peach trees. The wheat was enough to last the family of 13 souls about nine months. But it also helped the brothers pay for tractor hours to level and till the fields for each sowing as well as for other agricultural inputs. The few months after the wheat ran out, the family got by on maize. The peach trees annually brought in on average Rs25,000.

“Life was good,” says Said Ali. “There was a roof above our heads, and enough food to get us through the year. The kids went to school, the rain and snow never failed us and the good land always yielded a harvest.”

Then, owing partly to patronage by the government of the province and largely through the apathy of the federal administration, terrorists overran Swat in the summer of 2007. Schools closed down, the administration absconded and the writ of the State of Pakistan disappeared. For the next two years, Said Ali and his brothers waited. They awaited succor from the government of Pakistan. They waited for the army to deliver them of their predicament. But nothing happened. It seemed as if the state of Pakistan had forsaken them.

The year 2008 was hard. In the face of the dread of being deprived of what they harvested, Said Ali and his brothers still brought home their two crops of wheat and maize. But the peach harvest was lost. It perished while it waited in crates to be ferried by lorries to lowland markets. Few lorries were venturing into Swat however, and in dismay Said Ali and his brothers watched over the crated fruit as it rotted.

By March 2009, the family had exhausted their food. And so, in utter despair, they left home. They were not alone; there were thousands of other families similarly forced out of homes. Over the next nine months Said Ali and his brothers and their families, 13 in all, lived in Abbottabad. Since renting premises was out of the question for the family, they secured temporary quarters in a government school building serving as a camp for IDPs. They only ventured to return home in December 2009 after they heard that the army had cleared their area of the terrorists.

The family that had cared for their property in their absence gave them some food to get by until the next harvest. There was however no cash to show for the peach harvest — if at all there had been a harvest. With stoic patience and very little food, Said Ali and his joint family waited out the winter. In March, the brothers leased out half of their terraced fields and used the money to prepare the remainder for wheat. Then they gave their peach trees everything they had.

In March 2010, a team from Church World Service-Pakistan/Afghanistan and Swat-based Lasoona (a Pushto word meaning ‘hands’) visited the village. With ECHO (European Commission for Humanitarian Aid Office) funding through ACT Alliance partner, Dan Church Aid, the NGOs were launching a short-term rehabilitation project to enhance food security. Criteria for the selection of beneficiaries were straightforward. Those owning two kanals of agricultural land and a mud-plastered home were top priority. As well as the size of a family’s holding, vulnerability was also the guideline. Consequently, an affected person with a large number of dependents also stood to gain from the project.

Each beneficiary was to receive a grant of Rs 14,400. Of these, Rs 10,000 were in the shape of vouchers while the remainder was in cash. The vouchers came in a booklet like printed checks which could be redeemed from nominated vendors against agricultural inputs and implements. These included barrows, picks, shovels, sickles, seed and fertilizer. The cash grant of Rs 4, 400 was to pay for the repair of damage suffered during the period of absence.

However, this did not mean that only landowners were being administered to. Landless labourers were registered for cash for work. Indeed, the farmers’ cash grant was to fund this component of the project. A workforce was now available and men like Said Ali were in a position to pay for the repair of an irrigation channel or a mountain path; a damaged terrace or home.

In Khwazakhela Said Ali had just exchanged a few vouchers for a wheelbarrow, a spade and a sickle. I asked if he had ever had a barrow before. The old one was broken, he explained, and there was no way he could get one until the income from the peach crop was in hand in September. That would have meant six months of carting manure around his fields in a sack. The barrow will save a good deal of sweat.

Fourteen thousand four hundred rupees is a frightfully small sum even in Pakistan; in dollar terms one would not even sniff at it. But this is a sum that is turning around the lives of thousands of families affected by the Swat conflict.

As bleak winter turned to hopeful spring and Said Ali saw his peach trees break out in verdure, he was desperate to lease out the orchard. He desperately needed the cash to get his disrupted life back in order. But at that time it was still too early to talk to prospective lessees for all he would have got would have been a mere pittance. Then the Lasoona staff introduced the CWS-ECHO project to his village.

Today when the peaches on his tree are the size of chicken eggs, he has been offered Rs 26,000 for the lease. But now he knows he does not need that cash to buy his barrow or the maize seed to plant after the wheat is in. He is now secure and has therefore decided to harvest his peaches by himself when the time comes. With his shy smile Mian Said Ali says he hopes to count something in the vicinity of Rs 40,000 when the last of his cartons leaves his farm.