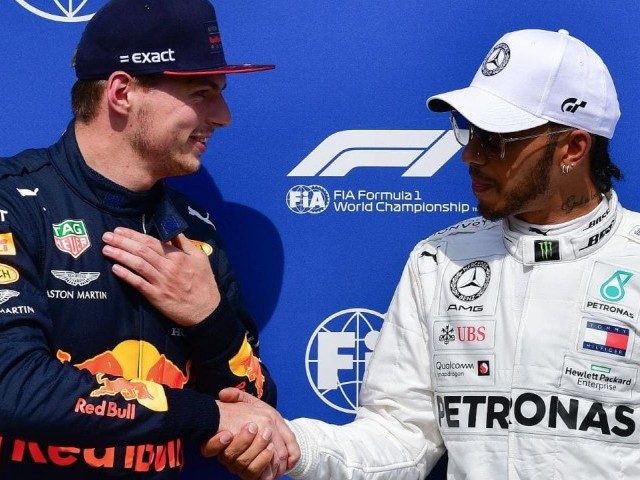 He congratulated Hamilton, 34, the man he is trying to knock off F1's pedestal as the dominant driver of the era -- an ambition that he may achieve in the seasons to come PHOTO COURTESY: FOX SPORTS

HUNGARORING: Max Verstappen lived up to his hype on Sunday — fast, big talking and realistic to the point of bluntness — with a performance full of maturity.

At 21, and in his fifth season as a Formula One driver, he finally started a race from pole position at the 93rd attempt.

But instead of turning it into his eighth career victory, he was forced to concede defeat in a rousing contest of skill and strategy decided by Mercedes’ decision to bring in Lewis Hamilton for a surprise second pit stop.

“They rolled the dice and it worked out for them, unfortunately,” said the Dutchman’s Red Bull team chief Christian Horner. “But you drove your heart out today so well done.”

After weeks of “silly season” speculation that linked him with moves to both Ferrari and Mercedes, and comments suggesting that he felt a lot of other drivers could have matched Hamilton’s five world titles in a Mercedes, it was time for some modesty.

To his credit, Verstappen recognised that. No more the Mad Max of his early seasons, he has better control of his emotions.

His rise to the top may come, but not just yet.

“I tried all I could, but we weren’t fast enough. It was hard for me to stay ahead and you always have to be realistic,” he said.

“But, you know, for me it was still a very positive weekend. Pole position and being second in the race.”

In an example of his growing level of maturity, he showed no disappointment or anger towards his Red Bull team whose strategy and tactics were inadequate to beat Mercedes.

“We tried the one stop and, of course, they had a new opportunity to do two. Today it worked out well for them.

“When you are second, of course, you can gamble a bit more with going for a two-stop because in the worst case scenario, you stay second.”

He congratulated Hamilton, 34, the man he is trying to knock off F1’s pedestal as the dominant driver of the era — an ambition that he may achieve in the seasons to come as the old master, who is now on 81 wins and only ten behind the record set by seven-time champion Michael Schumacher, declines with the years.

Alli to miss start of Premier League season with injury