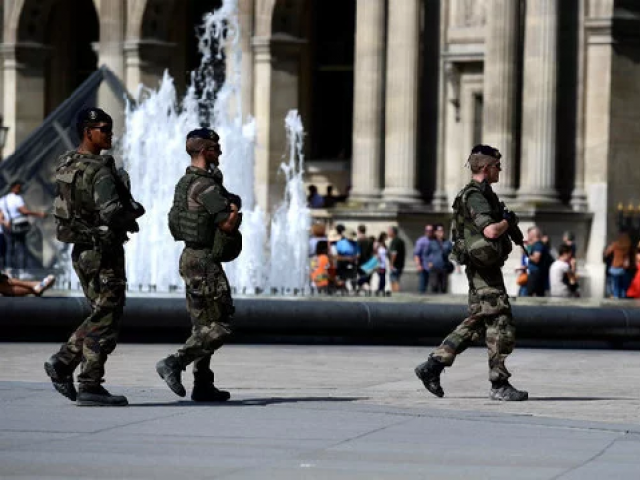 This picture shows soldiers on patrol in Paris. PHOTO: AFP

PARIS: Three men, including two already serving jail sentences, were charged for alleged involvement in a “terrorist criminal conspiracy” over a failed plot to kill a person, a source close to the case said on Wednesday.

The three men – including one man who had been jailed for spending six months in Syria in 2014 with a group affiliated to al Qaeda – had not yet decided on a specific target, the source told AFP.

But they had considered attacking a prison guard, the source said, confirming a report in the newspaper Le Parisien.

“It was a project, we were not on a particularly high level of risk,” said Interior Minister Christophe Castaner, adding that “intelligence has worked well”.

According to Le Parisien, the mastermind of the group was the 27-year-old, who had been jailed for being an “apologist for terrorism”.

He had been transferred to at least three different prisons and it was during those transfers that he met the other two suspects, the newspaper reported.

In recent months, two guards have been assaulted in prisons in the northwest of France, one by a prisoner convicted of terrorism and the other by a radicalised detainee.

Of some 71,000 prisoners in France, about 500 are either awaiting trial or already convicted for acts of terrorism.

A further 1,100 common-law prisoners are being monitored for radicalisation, according to official figures.

Trump’s son gets ‘Victory’ with horse from Mongolia