US, China move trade talks to Shanghai amid deal pessimism

US, China move trade talks to Shanghai amid deal pessimism 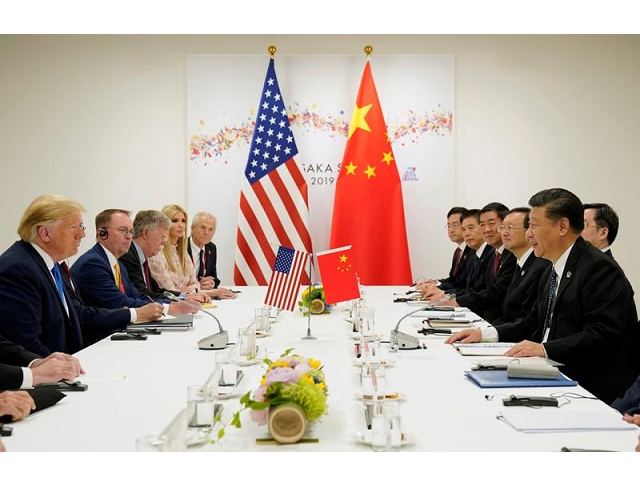 BEIJING/WASHINGTON: US and Chinese trade negotiators shift to Shanghai this week for their first in-person talks since a G20 truce last month, a change of scenery for two sides struggling to resolve deep differences on how to end a year-long trade war.

Expectations for progress during the two-day Shanghai meeting are low, so officials and businesses are hoping Washington and Beijing can at least detail commitments for “goodwill” gestures and clear the path for future negotiations.

These include Chinese purchases of US farm commodities and the United States allowing firms to resume some sales to China’s tech giant Huawei Technologies.

President Donald Trump said on Friday that he thinks China may not want to sign a trade deal until after the 2020 election in the hope that they could then negotiate more favorable terms with a different US president.

For more than a year, the world’s two largest economies have slapped billions of dollars of tariffs on each other’s imports, disrupting global supply chains and shaking financial markets in their dispute over China’s “state capitalism” mode of doing business with the world.

Trump and Chinese President Xi Jinping agreed at last month’s G20 summit in Osaka, Japan, to restart trade talks that stalled in May, after Washington accused Beijing of reneging on major portions of a draft agreement — a collapse in the talks that prompted a steep US tariff hike on $200 billion of Chinese goods.

Trump said after the Osaka meeting that he would not impose new tariffs on a final $300 billion of Chinese imports and would ease some US restrictions on Huawei if China agreed to make purchases of US agricultural products.

Since then, China has signaled that it would allow Chinese firms to make some tariff-free purchases of US farm goods. Washington has encouraged companies to apply for waivers to a national security ban on sales to Huawei, and said it would respond to them in the next few weeks.

But going into the talks, neither side has implemented the measures that were intended to show their goodwill. That bodes ill for their chances of resolving core issues in the trade dispute, such as US complaints about Chinese state subsidies, forced technology transfers and intellectual property violations.

US officials have stressed that relief on US sales to Huawei would apply only to products with no implications for national security, and industry watchers expect those waivers will only allow the Chinese technology giant to buy the most commoditised US components.

Reuters reported last week that despite the carrot of a potential exemption from import tariffs, Chinese soybean crushers are unlikely to buy in bulk from the United States any time soon as they grapple with poor margins and longer-term doubts about Sino-US trade relations. Soybeans are the largest US agricultural export to China.

“They are doing this little dance with Huawei and ag purchases,” said one source recently briefed by senior Chinese negotiators.

White House economic adviser Larry Kudlow on Friday said he “wouldn’t expect any grand deal,” at the meeting and negotiators would try to “reset the stage” to bring the talks back to where they were before the May blow-up.

“We anticipate, we strongly expect the Chinese to follow through (on) goodwill and just helping the trade balance with large-scale purchases of US agriculture products and services.” Kudlow said on CNBC television.

US Treasury Secretary Steven Mnuchin and Trade Representative Robert Lighthizer will meet with Chinese Vice Premier Liu He for two days of talks in Shanghai starting on Tuesday, both sides said.

“Less politics, more business,” Tu Xinquan, a trade expert at Beijing’s University of International Business and Economics, who closely follows the trade talks, said of the possible reason Shanghai was chosen as the site for talks.

“Each side can take a small step first to build some trust, followed by more actions,” Tu said of the potential goodwill gestures.

China says US tariffs must be lifted for a trade deal

A delegation of US company executives traveled to Beijing last week to stress to Chinese officials the urgency of a trade deal, according to three sources who asked to not be named. They cautioned Chinese negotiators in meetings that if a deal is not reached in the coming months the political calendar in China and the impending US presidential election will make reaching an agreement extremely difficult.

“Do the deal. It’s going to be a slog, but if this goes past Dec. 31, it’s not going to happen,” one American executive told Reuters, citing the US 2020 election campaign. Others said the timeline was even shorter.

Two sources briefed by senior-level Chinese negotiators ahead of the talks said China was still demanding that all US tariffs be removed as one of the conditions for a deal. Beijing is opposed to a phased withdrawal of duties, while US trade officials see tariff removal — and the threat of reinstating them — as leverage for enforcing any agreement.

China also is adamant that any purchase agreement for US goods be at a reasonable level, and that the deal is balanced and respects Chinese legal sovereignty.

US negotiators have demanded that China make changes to its laws as assurances for safeguarding US companies’ know-how, an insistence that Beijing has vehemently rejected. If US negotiators want progress in this area, they might be satisfied with directives issued by China’s State Council instead, one of the sources said. One US-based industry source said expectations for any kind of breakthrough during the Shanghai talks were low, and that the main objective was for each side to get clarity on the “goodwill” measures associated with the Osaka summit.

There is little clarity on which negotiating text the two sides will rely on, with Washington wanting to adhere to the pre-May draft, and China wanting to start anew with the copy it sent back to US officials with numerous edits and redactions, precipitating the collapse in talks in May.

Zhang Huanbo, senior researcher at the China Centre for International Economic Exchanges (CCIEE), said he could not verify US officials’ complaints that 90 percent of the deal had been agreed before the May breakdown.

“We can only say there may be an initial draft. There is only zero and 100% – deal or no deal,” Zhang said.