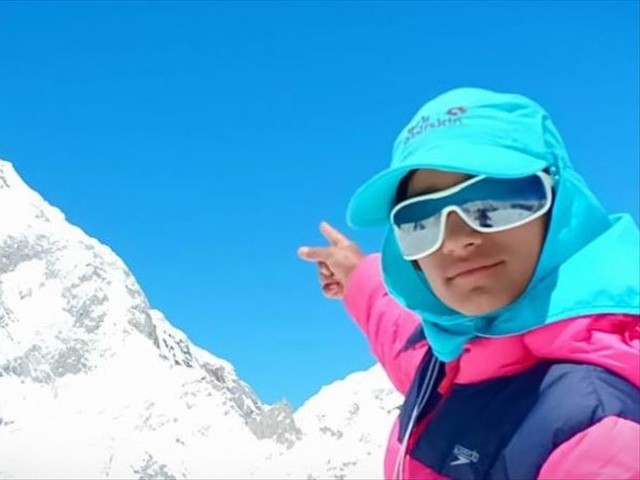 Selena Khawaja became the youngest person in the world to reach the summit of Mount Spantik, also known as the “Golden Peak”, situated in scenic Gilgit-Baltistan Karakoram sub-range.

“A 10-year-old girl from Pakistan, Selena Khawaja, who is known as the Mountain Princess has successfully scaled Spantik Peak. By doing so, she has become the youngest ever mountaineer to summit a 7000-er”, the Pakistani government said on Twitter last week.

Born in Abbotabad, a city in Khyber Pakhtunkhwa, the young “mountain princess”, scaled the Golden Peak on July 17, along with her father Yousaf Khawaja, a well-known mountaineer.

Selena was ecstatic after her “big achievement”, Yousaf told Anadolu Agency from Gilgit-Baltistan.

“I think she will be happier when she goes back to Abbottabad, where preparations are underway for her warm welcome,” he said, adding that internet problems in their current mountainous location of Skardu did not allow them see response to their feat or interact with other people.

Skardu, a village in Gilgit-Baltistan, is a gateway to the high peaks of Karakoram mountains range.

Yousaf noted that Selena currently suffered with altitude sickness, a common affliction for those who descend from such heights.

“The weather remained excellent all along and Selena remained extremely energetic and healthy throughout. Both Selena and I are extremely satisfied and happy about the summit because not only did she make the world record, but also all channels for her 8,000-meter [over 26,000 feet] summit opened,” Khawaja said.

Now, Selena is confident and ready for an 8,000-meter climb as well as Mount Everest, he added.

However, he added that funds were the only hurdle in her way, as they could not afford the expenses for the next journey.

Last year, the “Pakistani mountain princess” had become the youngest to scale the 5,765-meter (18,914-feet) high Quz Sar Peak of Shimshal Valley in Hunza on Feb 21.