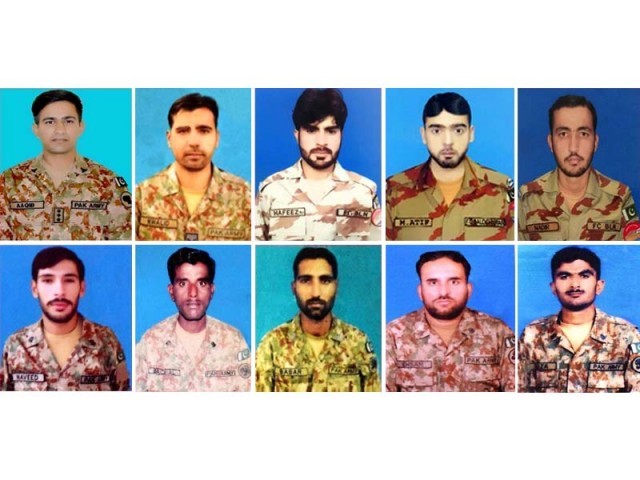 PESHAWAR / QUETTA: Two deadly attacks in the northwest and southwest of the country broke a relative lull in terrorist violence on Saturday. Ten soldiers – among them a captain – were martyred in the assaults on the security forces in North Waziristan tribal district of Khyber-Pakhtunkhwa and Turbat city of Balochistan.

“Salute to martyrs & families.We shall ensure defence & security of motherland at the cost of our sweat & blood.These are dying efforts of frustrated inimical forces while Pakistan moves from stability to enduring peace. It’s time for the world to facilitate regional peace”,COAS.

In the first assault, six soldiers were martyred when their patrol came under attack in the Shawal tehsil of North Waziristan district close to the border with Afghanistan. According to the Inter-Services Public Relations (ISPR), the attack, which happened in the Gurbaz area of Shawal, was perpetrated by terrorists from across the border.

The martyrs were shifted to Miramshah, the main city of North Waziristan, while the injured were ferried to a military hospital in the neighbouring Dera Ismail Khan district. The military has identified the martyrs as Havaldar Khalid, Sepoy Naveed, Sepoy Bachal, Sepoy Ali Raza, Sepoy M Babar, and Sepoy Ehsan.

The area was cordoned off and a search operation was mounted after the deadly assault which, according to the media has been claimed by the Tehreek-e-Taliban Pakistan, the outlawed terrorist group which has found sanctuaries in Afghanistan after they were routed in a series of military offensives in the erstwhile tribal regions.

North Waziristan – once a focal point in the global war on terror – held provincial elections for the first time earlier this month, a key step in bringing the region into the political mainstream after years of turmoil fuelled by terrorism.

In the second attack, terrorists ambushed a patrol of the Frontier Corps in an area between Hushab and Turbat city on Friday, according to the military’s media wing. Four paramilitary soldiers were martyred in the ambush, the ISPR said while identifying the fatalities as Captain Aaqib, Sepoy Nadir, Sepoy Atif Altaf and Sepoy Hafeezullah.

There was no immediate claim of responsibility for the attack, but Baloch terrorist groups fighting a low key insurgency in the province have carried out such attacks in the past. The deadliest of all these groups, the Balochistan Liberation Army (BLA), was designated by the United States as a global terrorist entity earlier this month.

Balochistan is an important part of transport and energy projects that form part of China’s Belt and Road initiative, which has brought $57 billion of investment to Pakistan. India has publicly opposed the massive project, called China-Pakistan Economic Corridor.

Pakistan has successfully stemmed the tide of terrorist violence as a result of a massive military operation, code-named Zarb-e-Azb, in 2014 in which the command and control centre of terrorists and their bomb-making factories had been decimated. The significant drop in terrorist violence has been acknowledged by national and international think tanks and monitors.

According to the annual report of The Center for Research and Security Studies, violence-related casualties continued to decline in 2018, registering 45% drop from the previous year and 86% drop since 2013. However, the year 2019 saw a relative resurge in terrorist violence which Pakistani officials say is being fuelled by hostile agencies, India’s RAW in particular.

The chief military spokesperson hinted at the possible involvement of foreign forces in the latest attacks. “Shahadat of 6 soldiers on Pak-Afghan border & 4 in Balochistan is the sacrifice Pakistan [is] making for peace in the region,” Maj Gen Asif Ghafoor wrote on his official Twitter handle.

“While security of [erstwhile] tribal areas has been improved with efforts now focused to solidify [the] border, inimical forces are attempting to destabilise Balochistan. Their efforts shall Insha Allah fail,” he said in his tweet.

Shahadat of 6 sldrs on Pak-Afg Bdr & 4 in Bln is the sacrifice Pakistan making for peace in the region. While security of tribal areas has been improved with efforts now focused to solidify border, inimical forces are attempting to destabilise Bln. Their efforts shall IA fail.

Army chief Gen Qamar while paying tributes to the martyrs called upon the international community to facilitate peace in the region. “Salute to [the] martyrs & families. We shall ensure defence & security of [the] motherland at the cost of our sweat & blood,” Maj Gen Ghafoor quoted him as saying.

“These are dying efforts of frustrated inimical forces while Pakistan moves from stability to enduring peace. It’s time for the world to facilitate regional peace,” the army chief further said.

The two deadly attacks came days after a meeting between US President Donald Trump and Prime Minister Imran Khan which focused on Pakistan’s crucial role in helping to broker a political settlement to America’s longest, costliest and deadliest war in Afghanistan.

The timing of the attacks is a telling reminder that whenever Pakistan moved to play a direct role in restoring peace in the strife-torn Afghanistan, inimical forces sabotaged these efforts in an attempt to deny Islamabad any credit for putting an end to the bloody war in its neighbourhood.

Prime Minister Imran Khan also took to Twitter to condemn the attacks and laud the resolve of the armed forces in the country’s fight against terrorism.

“My condolences and prayers go to the families of the 10 brave soldiers, including an officer, martyred fighting terrorists in North Waziristan and Balochistan today,” he wrote.

I salute our armed forces personnel who continue to lay down their lives fighting terrorists to keep the nation safe. My condolences & prayers go to the families of the10 brave soldiers, including an officer, martyred fighting terrorists in North Waziristan & Balochistan today.

K-P Chief Minister Mahmood Khan expressed grief over the martyrdom of the army soldiers. “We will eliminate terrorism from the country as the morale of the population is high,” he said. “Enemies of the country will never be successful in their plans.”

Balochistan Chief Minister Jam Kamal Khan also condemned the terror attack in Turbat. “Coward terrorists have once again attacked the security forces that are making endless sacrifices for our country,” he said in a statement.