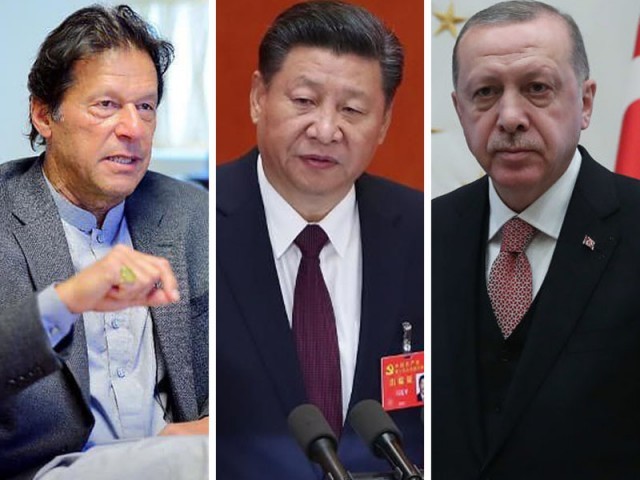 ISLAMABAD: Just days after Prime Minister Imran Khan’s highly successful visit to Washington, China and Turkey on Friday threw their weight behind the international community’s efforts to seek a peaceful resolution to the longstanding Kashmir dispute.

Beijing especially backed US President Donald Trump’s recent offer of mediation between Pakistan and India in the Kashmir issue.

“We hope the two countries can peacefully settle the Kashmir issue and other bilateral disputes through dialogue, and make concerted efforts to safeguard peace and stability in South Asia,” she added.

The support by China and Turkey is seen as another diplomatic victory for Pakistan at a time when the visit of Imran Khan to the United States effectively neutralised Indian efforts to isolate Islamabad globally.

Officials said positive moves on the diplomatic front were the result of prime minister’s successful visit to the US.

In his first visit since becoming the prime minister, Imran, even independent observers agree, pulled off a diplomatic coup in Washington with his positive and constructive engagements not only with President Trump but with other US figures also.

What was more signification was Trump’s revelations that even Indian Prime Minister Narendra Modi requested him to play the role of mediator between Pakistan and India.

New Delhi, however, was quick to reject Trump’s statement. Nevertheless, uproar in India suggested that the neighbouring country was upset over Pakistan once again being at the centre stage for the Afghan peace process.

India has long been pushing for seeking Pakistan’s isolation and before the prime minister’s visit, the Trump administration was more inclined towards New Delhi’s narrative.

Meanwhile, a statement issued by the Prime Minister Office said President Erdogan extended sympathies and condolences over the loss of precious lives in the recent terrorist incident in Pakistan.

“Both the leaders expressed satisfaction over the strong bonds of brotherhood and close cooperation between the two countries,” the statement added.

The prime minister and Turkish president reviewed progress made in a number of important areas of bilateral cooperation, particularly since prime minister’s visit to Turkey in January 2019.

They also noted that bilateral collaboration in diverse fields would be further strengthened during the next meeting of the Pakistan-Turkey High-Level Strategic Cooperation Council (HLSCC) to be held in Islamabad later this year.

The prime minister stated that the government and people of Pakistan were looking forward to President Erdogan’s visit for the next meeting of HLSCC.

In the regional context, the prime minister apprised President Erdogan of Pakistan’s steadfast support to the international efforts for peace and reconciliation in Afghanistan.

During the conversation, Prime Minister Imran also highlighted the situation in the IOK.

The two leaders also discussed the Pakistan-Turkey-Malaysia trilateral process and exchanged views on the next steps.