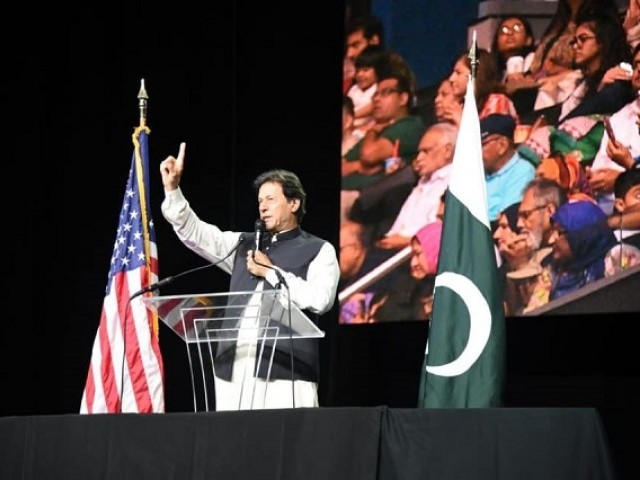 In front of thousands of Pakistani-Americans on Sunday, Prime Minister Imran Khan said his vision for ‘Naya Pakistan’ is merit and equality for all citizens.

“Naya Pakistan is being created in front of our eyes. Everyone is accountable and there will not be two separate laws for the rich and the poor,” the premier stated during his rally at Capital One Arena in Washington DC.

Talking about the country’s debt, he said Pakistan was looted by previous governments and its debt raised from Rs6,000 billion to Rs30,000 billion over the past 10 years.

“The Pakistan Tehreek-e-Insaf (PTI) government inherited huge debt and the national institutions were sinking in losses,” he said, adding that he was confident in his government’s ability to pull Pakistan out of its current difficulties.

He said the government will reform all loss-making entities including Pakistan International Airlines (PIA), Pakistan Railways and the power and gas sectors.

“There will be a difficult time of four to six months, or a year. But we will get Pakistan out of it and make it self-dependent,” the prime minister said.

The PM reiterated that he would not strike any deals with “plunderers” and said the process of accountability will continue unhindered.

“The National Accountability Bureau, FIA and all other institutions are independent,” he stated, adding those who looted the country will be brought to justice.

The prime minister, who has held a number of meetings with businessmen and investors, stated his government would ensure a corruption-free environment.

“I promise that foreign companies will come to Pakistan in droves. We will end corruption, attract investment and achieve unprecedented growth in all sectors. We will fully tap Pakistan’s potential.”

PM Imran also announced plans for reforms in Pakistan’s cricket setup and assured the expat community that they would see an efficient and capable team at the next World Cup.

“After the World Cup, I have decided that I am going to reform Pakistan cricket. We faced disappointment in the 2019 World Cup but, mark my words, we will have a professional team at the next World Cup,” he said.

Referring to the Afghan peace talks, the PM said his longstanding stance on the Afghan solution is being endorsed today and the world has finally understood that there can be no military solution.

Talking about the education system in Pakistan, the premier stated that the PTI government is striving for a uniform syllabus across the country. “We want to ensure that every citizen has equal opportunity to succeed in Pakistan,” he said, adding that madrassa students will also soon be brought into the mainstream.

Throwback to the time Imran and Trump had a Twitter spat