Six seats go to indepe­ndents, PTI gets 5, JUI-F 3 and ANP and Jamaat-e-Islami secure one seat each
By News Desk
Published: July 21, 2019
Tweet Email 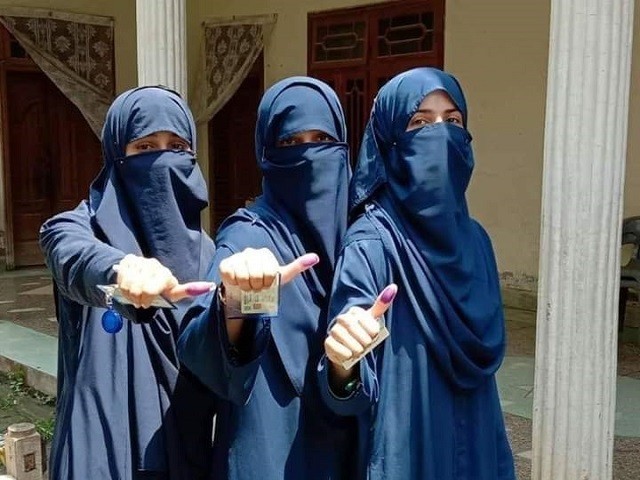 Girls pose for a photograph after voting in Saturday's elections in K-P's tribal districts. PHOTO: TWITTER/PTI

The Jamiat Ulema-e-Islam-Fazl (JUI-F) bagged three seats, and the Awami National Party (ANP) and the Jamaat-e-Islami (JI) both secured one seat each.

In PK-103 (Mohmand-I), ANP’s Muhammad Nisar Ahmed secured victory with a total of 11,247 votes while PTI’s Rahim Shah could manage to bag 9,669 votes in second place.

PTI’s Syed Iqbal Mian was victorious in PK-109 (Kurram-II) with a total of 39,536 votes. Inayat Ali, an independent candidate, secured the second position with 22,975 votes.

PTI’s Nasirullah Khan was victorious in PK-114 (South Waziristan-II) with 11,114 votes, while independent candidate Muhammad Arif was second with 10,272 votes.

Districts of erstwhile Fata, now called tribal districts, were merged with K-P last year after the passage of the 25th Constitutional Amendment. Sixteen provincial assembly seats were carved out of the area where the election was held on Saturday amid heightened security.

The elections in the merged districts concluded more or less peacefully amid high security ensured by Pakistan Army, police, Levies Force and Khasadar.

The ECP  had installed security cameras at most polling stations.

The polling process in the tribal district started at around 8am and continued till 5pm mostly without any interruption. A few scuffles among supporters of various political parties, independent candidates and polling agents were reported in some constituencies in Khyber, Mohmand, and North and South Waziristan tribal districts.

The voting process was also halted in these constituencies during the scuffles.

This was the first provincial assembly election in the tribal districts, which witnessed an unusual enthusiasm among people – young, old, women and disabled – who were seen in queues outside the polling stations long before polling started at 8am.

Under the ECP rules, the independent candidates are bound to join a political party within three days after notification of their victory; otherwise, they are considered independent MPAs and notified as such. The winning candidates will have to declare their assets to the ECP.

A total of 21 seats – sixteen general seats, four women (reserved seats) and a minority seat – from the merged tribal districts will be added to the existing body of lawmakers at the K-P Assembly.

These newly-elected tribal lawmakers would take part in the legislation for the districts as well as the K-P’s settled districts, but would not be able to take part in any move to remove the K-P chief minister.